Beverley department store Browns have vowed to stage the Christmas Lights Appeal Fashion Show again next year after they admitted they were delighted with the response to this year’s event.

Manager Louise Grant, whose store took over and ran the popular event after usual venue the Memorial Hall was unavailable, said the show raised more than £1,600 for the Beverley Christmas Lights Appeal.

Members of staff, friends and family all offered their modelling services for free and an enthusiastic crowd of all ages revelled in the clothes and accessories modelled.

As well as female models, an extra-special touch was provided as male partners, sons and family members acted as escorts for the elegantly dressed ladies.

Louise told HU17.net: “When we first opened we were aware how big the Christmas Lights Appeal was and I spoke to councillor Kate Grey about holding events here.

“We had a meeting in May, we talked about how we could do it and it went from there.

“We stood the cost of everything and all the staff volunteered their services for free.”

The fashion show was held in two stages and in between, guests were able to use vouchers provided by Browns, peruse the store and buy the products on offer.

A raffle, which included prizes such as expensive designer handbags, raised more than £400 towards the appeal.

Louise continued: “People are still talking about the event now, they couldn’t believe all the models were staff and had never modelled before!

“All the volunteer models really wanted to do it again. They were all a bit wary at first, but the second time they went up they really started to get into the swing of it and created their own theatre. They totally changed what we had practiced as they found their own rhythm.

“It was a bit of a win-win situation. The appeal made a lot of money and a lot of people were able to see just what we are about.

“We were thrilled with the way the evening went, and delighted with the coverage and feedback we received.” 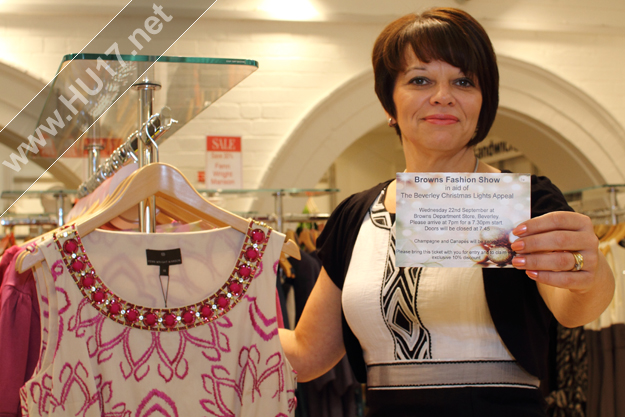