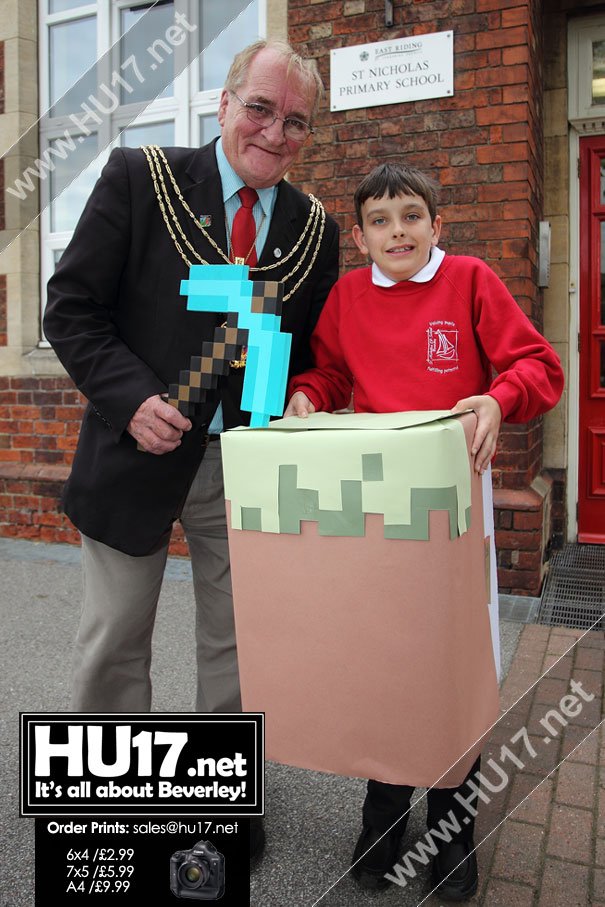 St Nicholas Primary School welcomed the Mayor of Beverley, Peter Astell into their school today to officially open their Minecraft After School Club.

Following a successful trial the school have launched two clubs offering pupils the opportunity to game together within their IT suite.

Minecraft was developed by a Swedish programmer Markuss Persson and is a first person ‘sandbox’ box allowing players to create whatever they decide to with the blocks they mine.

“MinecraftEDU has been installed in every school in Northern Ireland as a massive pilot project, and we hope that the rest of the UK will follow in the next few years.”

“By bringing MinecraftEDU to Beverley schools, we are starting that journey today.”

Simply put Minecraft is like a virtual Lego kit. The game allows the player to start with blank canvas and through collecting blocks they are able to build whatever they like using their own imagination.

The introduction of the club at the school has proven to be very popular with the pupils, with the head teacher Mrs. Pollard saying that it has helped with a number aspects in the children’s development, including helping the children to build real-life relationships with one another.

One pupil, who plays Minecraft at home on Xbox told HU17.net;

“At home I play online but playing at school is much better as there are more mods made to the game. Furthermore, when you play at home there is always the risk someone will destroy your creations.”

“Here at the Minecraft club, you can see other people’s screens so you know if they are going to be sneaky. Another thing that makes it better is the quality of the gaming experience.”

“On Xbox Live the game can ‘lag’ and run slow, but we do not have them problems here.”
Commenting on the launch Cllr, Peter Astell said;

“I thought that it was very interesting and not only is it an after school club but it looks like it could be now part of the school learning, which is good for the school, staff and young people.”

“To think that all of those young people, about 30 of them stayed after school is excellent news for the school.”

While this is a game, the school have much bigger plans going forward. Shellie Horst who runs the after school club said;

“We are already using in game maps on the school server to explore History, Maths, English and Geography. The club itself also teaches important social skills and online gaming etiquette.”

“It has been my privilege and pleasure to work with Shellie and St Nicholas Primary School on bringing Minecraft to the school.”

“Shellie had this great idea to set up a Minecraft Club as a way of engaging the children at the school with a variety of different topics.”

“Our shared vision is to bring Minecraft to schools across Beverley and to be able to support those teachers who wish to engage their students using game-based learning.”

With over 100 million users registered around the world, this game that has very simple blocky graphics may turn out to be a great tool for when it comes to education.

Teachers at the school also say that the range of students who have joined the club has in some cases surprised them, and that they are pleased with the number of girls who have joined.