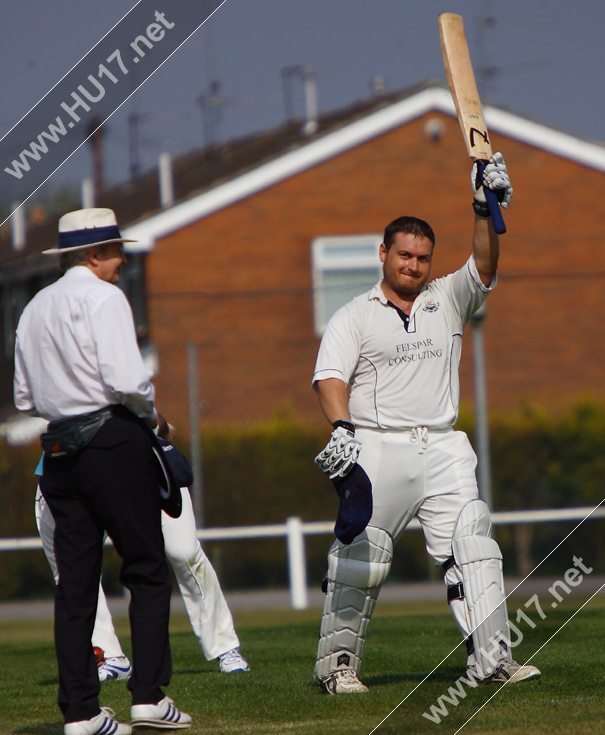 There were no shortage of fine performances for Beverley, but there was no real doubt that the day belonged to Jon Fisher.

He brought up a magnificent century, looking particularly powerful behind square on both sides of the wicket, as he led his side to a formidable total of 248.

The early foundations for Beverley’s success was laid by Peter Groves, who hit a rapid 57, and on another belter of a wicket Fisher, supported by Anthony Spence (40) made certain his side would not miss out.

He slowed down, naturally, as he approached his century, but his delight was there for all to see as he clipped a ball into the leg side to bring up the single he needed.

Fisher’s dismissal for 111 led to a late flurry of wickets, which stopped the home side getting as many as they had hoped, and fast bowler Matthew

Mudd was heard to say Goole believed Beverley had not scored enough. As one team member retorted quite angrily: “Let’s just see how they do!”

The first over of the Goole innings set the tone for the rest of the day, although it was one of the more peculiar first overs ever seen at the Norwood Recreation Ground.

Alex Morrell was all over the place and it seemed the over would never end. But he got a touch on a straight drive that diverted the ball on to the stumps for that most fortunate of run-out dismissals.

He then picked up another wicket, a full-length ball slapped to mid-on, and by the end of the first over Goole were 13-2!

Morrell was replaced by Mudd himself, and he revelled in the responsibility.

He picked up 3-45 and along with a late flurry of 3-2 by Steve Blake, bowled Goole out for just 74 to send their East Yorkshire rivals back home with their tails between their legs.