Yorkshire Ambulance Service NHS Trust and the staff at Beverley Ambulance Station have expressed their thanks to the community for their support during the COVID-19 Pandemic.

Since the outbreak staff based there say they have been overwhelmed by the support shown by the community and local businesses.

Thursday 28 May will see the ‘clap for carers’ incentive which has lasted ten weeks officially brought to an end.

As a result, staff based at Beverley wanted to take the opportunity to show their appreciation for the support they have been given.

Yorkshire Ambulance Service along with the 50 staff based at Beverley Ambulance Station have continued to take care of people living in Hull and East Yorkshire throughout the crisis.

Speaking to HU17.net, Philip Savage a Paramedic with Yorkshire Ambulance Service based at Beverley said;

“The community have been wonderful. They have been bringing in things like food packages, bags to put our uniforms in and fruit. Also, they have been giving us general waves as we go about our duties.”

“All of this makes us realise just how much people find us quite special which make us appreciate them even more.”

“Seeing all the rainbows everywhere is absolutely wonderful and heartwarming. Often they have been done by children so they have been brought up to appreciate the work that we do. We also see the signs that have been laid out by people giving us mutual support and encouragement.”

“Nightshift can get quite lonely at times. So seeing the things the community has done perks you up a little bit knowing that there are people out there thinking of you.”

“The most unusual thing we have seen is on the way out to Tickton where there is a great big unicorn.  Its has a thank you message on it which always gives us a tickle as we pass it.”

“While we are going about our work we are always on the lookout for something new. People are also just giving us a wave as we go by which is really lovely.”

“Everyone based here at Beverley would like to extend their thanks to people and businesses for the support they have offered us.”

“So long as they keep doing their part and social distancing best they can we will keep doing our part. As we always have done and always will do.”

Philip says the Clap For Carers has had a positive impact on communities in the region.

He adds that it has helped bring people together, he said;

“Knowing that the community is coming together bringing food parcels, bringing care packages to their houses and just keeping an eye out on each other. This is a very positive thing for us knowing that people are being taken care of.”

“It can’t always come down to key workers. So the community spirit being shown is really important.”

Sector Commander Thanks Public And Businesses For Their Support 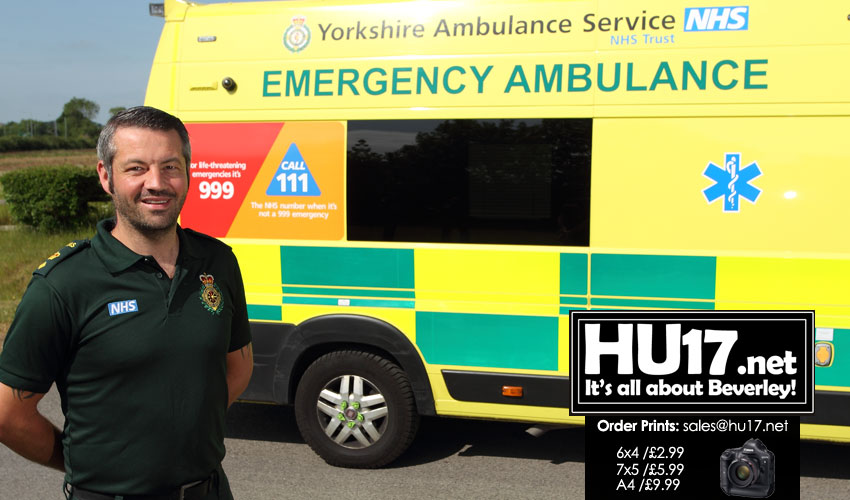 Sector Commander Andrew Pippin says the generosity shown by local businesses and people has had a huge impact on the morale of those based in Beverley.

He adds that the amount of support has been overwhelming but certainly welcomed.

“I think nationally this has been a really challenging time for the NHS as a whole.  Particularly for the Ambulance Service and all our frontline workers including patient transport and A&E Operations.”

“We have been fortunate enough to be in a position to take some of the wonderful donations and donate them to some of the more vulnerable population throughout Hull and East Riding.”

“I would like to say thank you very much to the public and local businesses for the support they have given all the staff who continue to extremely hard throughout the COVID response.”

“May I also take this opportunity to remind people to stay alert, stay safe so we can control the virus.”