The resident, who has asked not be named says that the building is an eyesore and should certainly not be stored there.

Speaking to HU17.net they said;

“There are plenty of places you can store a building that is not on a residential street. It is blocking windows and is a total eyesore.”

“I feel that this has been put here through spite. It could have been stored somewhere else more suitable, maybe on the developers own drive.”

“It is just bully boy tactics as they know they can get away with it.”

Richmond Properties who own the land say that under the rules they are fully entitled to store the building on the plot. They say they have also submitted plans for a more permanent structure.

“I can confirm we are storing a portable building on some land we own off  Holme Church Lane. This does not breach any planning legislation.”

“Currently we have a planning application being submitted for the erect of a garage.”

“In the short term, we have some land and need somewhere to store the building which is why it has been placed on that plot.”

“Under the current rules, we do not require planning permission to store a portable building on the site.” 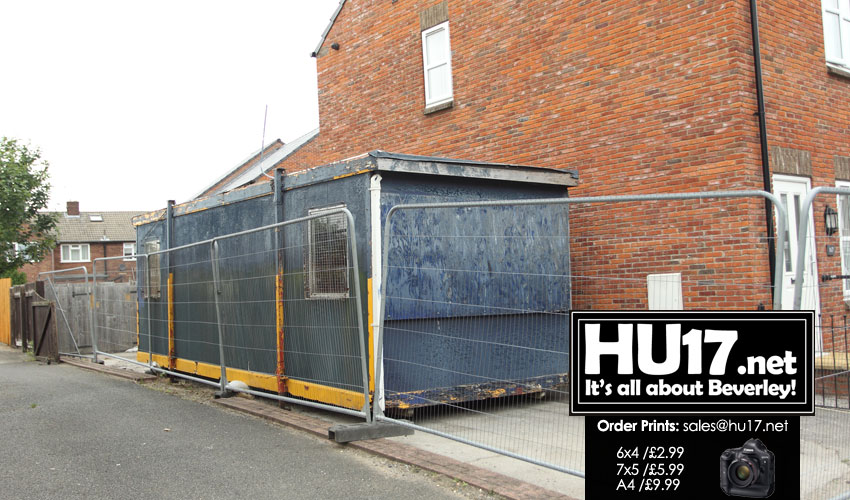 Local residents have called upon the help of local Cllr David Elvidge, hence he visited the site, he said;

“After been contacted by a resident who was concerned about a Porta Cabin type building put next to his son’s house. As a result of this call, I went to have a look at it.”

“I agree with his concerns as it does obscure the light from one of his downstairs windows. However, I also received a call from the developer who put the Porta Cabin there.”

“He assures me it will be gone in a few days. So I am hoping this will have a quick resolution. That said, East Riding officers will also look into the matter and report back to me.”