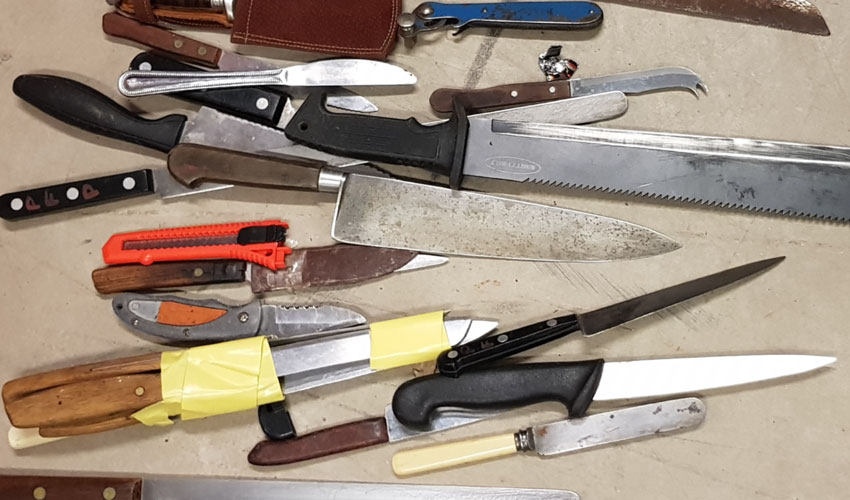 Beverley residents deposited 20 knives during a week-long national campaign to get people to surrender knives.

Humberside Police say that during #OpSceptre in total 500 knives were given up throughout the region.

The campaign was launched following the spike in knife crime that has led to a number of deaths in the UK.  Good news for residents in  Beverley is that 20 lethal weapons have been taken off our streets.

Hull’s Inspector Matthew Wilson was present when the bins were unlocked. He said;

“There are some very serious weapons here that will now be destroyed and will never get into the hands of anyone who intends to do harm.”

“There is a mixed bag of weapons in the bins and some are souvenir swords which although are not the usual lethal weapon. If the owners want to get rid of them then I am happy they’ve handed them in.”

“Some bins got a lot more knives handed in than others. The main areas being Hull and Grimsby. I want to thank everyone who took the time to come to hand in these weapons.”

Beverley Hands In More Knives Per Resident Than Hull

Unsurprisingly Hull and Grimsby topped the list for the number of knives handed in. However, despite Beverley been a small town, in percentage terms, Beverley handed more knives per resident than Hull.

Knife crime in the UK has risen by two thirds in just five years. 2-18 was the worst on record for a decade in a year that says 37 children killed on our streets.

Cuts to police budgets and the demise of community-based services are thought to have contributed to the growth. As a result, the government has pledged to make more money available to police to tackle the issue.

Police say while the amnesty has officially come to an end they are still happy for people to hand in any unwanted knives.

They also add that the police will continue to visit local schools in an attempt to educate young people about the dangers of carrying a knife.