Acclaimed musician Carl Barât – who rocked Hull Ice Arena last September with The Libertines – is returning to the city next week as part of Back To Ours festival.

Hull UK City of Culture 2017 has announced that Carl Barât will be playing North Point Shopping Centre in Bransholme next Saturday (16 February), hot on the heels of Reverend and The Makers the night before. 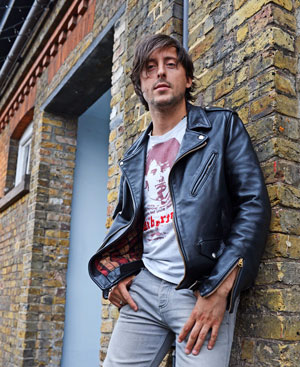 As a member of the Libertines Barât released two albums, Up The Bracket
(2002) and The Libertines (2004). His next band, Dirty Pretty Things, released Waterloo To Anywhere (2006) and Romance At Short Notice (2008), followed by a solo album, Carl Barât, in 2010 and his first book Threepenny Memoir – The Lives Of A Libertine in the same year.

Tickets, which cost £7.50, will be available from North Point Shopping Centre from 10am on Saturday. Any remaining tickets will go on sale online on Monday 12 February at 6pm.

Back To Ours Director Louise Yates added: “The music gigs at Back To Ours are always a popular choice so when Reverend and The Makers sold out, we decided to add an extra gig onto the line-up. We expect tickets to be snapped up so if you don’t want to miss out, get yourself along to North Point Saturday morning.”

The festival, which runs from next Tuesday (13 February) to Sunday (18 February), also includes:

• The Amazing Bubble Man: Let Louis Pearl enchant, delight and amaze you with his unique show. From square bubbles, bubbles in bubbles, fog-filled bubbles, caterpillar bubbles and even people inside bubbles, The Amazing Bubble Man guarantees shrieks of laughter and gasps of amazement from everyone. He’s been wowing audiences around the world for 30 years, so prepare to float away in a world of incredible artistry, comedy and magic with bubble volcanoes, rocket ships and maybe even a flying saucer or two taking flight in the most unusual of places.

• Hotel Paradiso: Thrillingly spectacular circus skills blend seamlessly with charm, physical comedy, clowning, juggling, theatrical storytelling and slapstick in, a colourful, loud and funny show. Meet Madame and the charming staff of the quirkily ineffective Hotel Paradiso and their arch enemy, the dastardly Banker, who schemes to repossess the hotel. The cast of six highly skilled acrobats, clowns and jugglers tell the story of how the tenants battle to save their home and livelihood. Will they manage to stay open, or will they be forced to move on?

• Picture House: Step into the magical, animated world of Claymation with two of Nick Park’s best-loved films, Chicken Run (U) and Wallace & Gromit: The Curse of the Were-Rabbit (U). Join Lucky the chicken to earn your wings by taking part in workshops and activities. Make your own Claymation character in an animation workshop and attend flight school before sitting down to see if Ginger and Rocky the Rooster can escape a grisly fate in Chicken Run. Watch the marvellous minds of Wallace & Gromit in Curse of the Were-Rabbit, immerse yourself in the wonderful world of inventions and become a member of the Inventor’s Club! Help a team of inventors solve many veggie-troubles in their ideas factory and make your own clay bunny in an animation workshop.

• The Giant’s Loo Roll: Adapted by the original book by Nicholas Allan, the show tells the story of one giant’s runaway toilet roll which has gone bouncing down the hill heading straight towards the villagers living in the town below his house. Luckily, the townsfolk find lots of uses for runaway loo paper – but what about the giant? Doesn’t he need any loo paper? Well the ingenious townspeople have an answer for that too! Watch out for some frightened sheep, lots of excited children and a fantastic amount of toilet paper in this rip-roaring children’s musical.

• Reverend and The Makers (SOLD OUT)