“When the Beverley Film Society committee heard a new cinema was moving to Beverley it was delighted to hear it would be the independent Parkway group and have not been disappointed.” 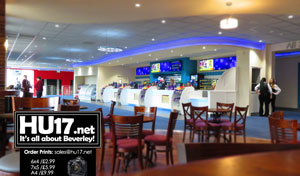 “Some of the best aspects about Parkway include the exterior and interior design that harks back to a bygone age of film, the technologically advanced screens and equipment, the comfortable seats, a café bar for post film chats and access for all within the premises.”

Beverley adds that working with the general manager and his team makes a real difference, she said;

“Cliff Baillie goes over and beyond to ensure everyone has what they need and that their events are a success. It would be a genuine challenge to find a more welcoming, friendly team within a cinema setting.”

“The cherry on the cake is their attitude to working with the local community and its various groups and festivals.”

“His approach is to provide entertainment spanning from blockbusters to the more niche indie offerings, which includes those the society screen.”

“In addition to this, the programme features nationally broadcasted live event cinema, with many screenings selling out quickly.”

Parkway Cinema will find out next month if they have been successful in winning the Cinema of the Year Award at a special event being held in London.

“Their nomination for this award is well deserved. Everyone at the Beverley Film Society wishes Cliff and his team every success in London.”

To find out more about the schedule for the Beverley Film Society you can view the New Season’s Listings for 2017-2018 here.