Turning up with an under-strength squad meant the Ionians coach requested a reduction in player numbers, and the loan of players through the match. 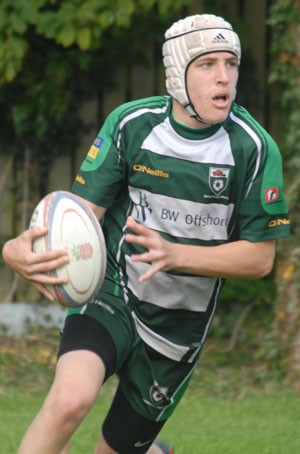 Kicking off with 13-a-side teams, the Beverley forwards were quick to assert themselves with a try from prop Oliver Lazenby in just the second minute. Unfortunately the same move resulted in hooker Alex Crockett being sidelined with an ankle injury, necessitating a reorganisation of the Beverley forwards.

After a quick conversion by Tom Barnard (playing at fly-half), Ionians’ restart saw the Beverley backs placed under pressure with a rapid a pacey and well-worked try coming from the Ionians left wing levelling the score at 7-all after just 3 minutes. The speed of the game was maintained when, after relentless pressure from the Beverley pack following the restart, Ionians leaked a second try (Ben Walker, number 8, converted by Barnard).

Despite having lost their hooker, the Beverley pack were dominant in the scrums and helped to repeatedly secure good ball at breakdowns. The game began to settle, although Beverley always looked dangerous and their fast line speed and high turn-over rate at the rucks were helping them win the battles for both possession and territory.

With good movement through the half-backs, the Beverley centres (Alex Nuttall and Nathan Cullen) were testing the Ionians defence and it was only a matter of time before Cullen was able to use his strength and pace to break through and cross for Beverley’s third try (again converted by Barnard).

Having built up a 21-7 lead at half-time, Beverley reorganised their backs but, from the start of the second half, ensured that the pressure was maintained – and it wasn’t long before Josh Dillon went over.

Ionians were by now appearing demoralised but the Beverley forwards kept up their fast-paced game, Lazenby crashing over for his second of the day (converted by Barnard) just 3 minutes later. Barnard exploited the gaps appearing in a tiring Ionians back line, running in a hat trick of unanswered tries (two of which he converted) in just a 5 minute passage of play.

With a six-score cushion, and only 10 minutes left to play, Beverley began to relax their grip on the game allowing Ionians to score a couple of consolation tries, one of which was converted.

The final 52-19 scoreline reflected the effort put in by the whole of the Beverley team, with all players – many of whom were playing out of position – showing commitment and discipline.

Man-of-the-match went to Barnard. Finally, special thanks to those Beverley players – Tom Haylock, Ed Ling and Oliver Jenner – who pulled on an Ionians shirt to help them out.