The blue and golds hit the road this Saturday when they take on Queensbury in West Yorkshire.

Queensbury, along with Bentley are fellow challengers to Beverley for fourth spot in the league and the chance to go on to the end of season Grand Final. 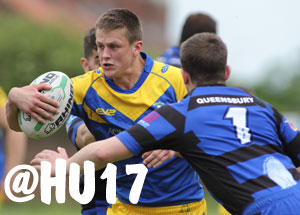 Beverley’s coach Scott Taylor has a simple target, that is three wins from Beverley’s three remaining games starting this weekend.

When the sides met back in June, Queensbury were no match for Beverley who extended their winning streak running out 22-6 winners that left Taylor purring over his sides performance describing it as ‘the best team performance of the season.’

Come Saturday should Beverley manage to complete the double over Queensbury it will keep them firmly in the mix for a Grand Final place.

Taylor will have to make do without the services of Lee Stevens and Mike Cooper due to a Wedding with the latter being the best man.

Taylor will also be without one young finds of the season Luke Inglis. However he will be boosted by the return of Lewis Straw and possibly Tom Moor who has returned from his RAF posting in the Falklands.

Anyone wishing to travel with the team can catch the that will depart from the Potting Shed at 12noon for this 2.30 kick off.