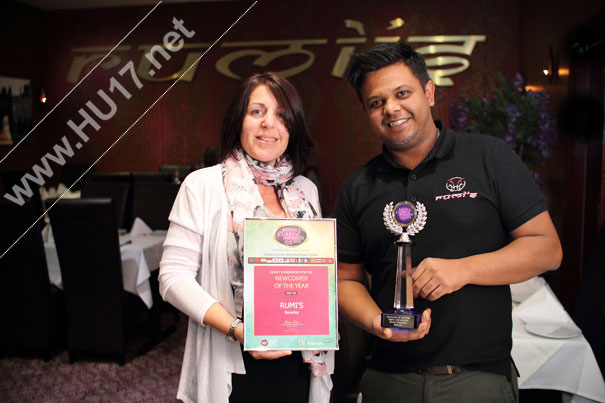 A little over a year since opening Rumi’s Indian Restaurant, the owners have seen their efforts acknowledge after being named the Newcomer of the Year at the Asian Curry Awards.

Since opening Rumi’s have been a real success thanks to the Sham Alom and Sarah Day whose vision was to bring authentic home-cooked Indian cuisine to Beverley.

Speaking about the awards, Sarah said;

“The Asian Curry Awards are like the Oscars of the curry awards. There 35,000 in the industry involved covering all Asian foods styles like Nepalese, Chinese, Indian and Turkish.”

Split into regions, there are a number of awards that were up for grabs, though Rumi’s were put against all the new businesses across the country.

“New Comers was the hardest award to win. Although it was new section there were 50 entrants to the category. That was whittled down to 12 and Rumi’s got the judges support to win the overall award.”

Sarah said that everyone at Rumi’s is still unclear how they were nominated and after learning the news were visited by a judge, Sarah said;

“George Shaw came into the restaurant, judged us on decoration, the service and the restaurant and Sham’s food which he cooked for him.”

“Following his visit the chairman himself came along as Mr. Shaw was so impressed he really wanted to show him the restaurant and things escalated from there.”

“We never thought we would get anywhere. We are a baby restaurant we have only been open a year. It is fantastic someone has nominated us. We decide we would go along for the night out and see how it all works.”

“While there we had the opportunity to look at some of the awards that were on offer, but we were maybe a little nervous to go for them as you were up against chefs who have been doing this for years.”

“When we realised we had won we felt very humble and were gob smacked!”