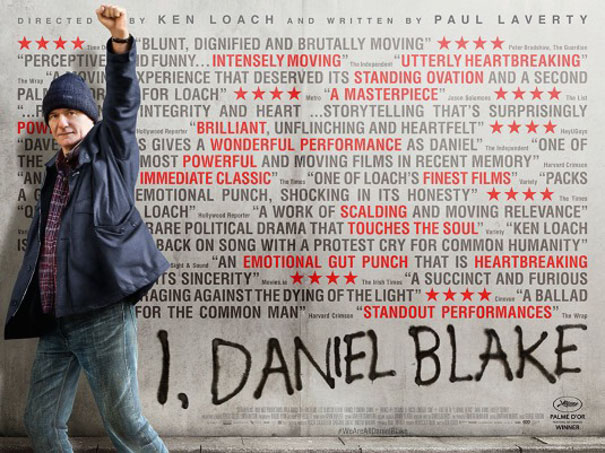 I, Daniel Blake, is a social-realist drama is about a disabled carpenter struggling with the red tape of the benefits system.

Film director Mr. Loach, who is 80 next month, came out of retirement to make the film. Mr. Loach said it was “very strange” to received the award in such glamorous surroundings, considering the conditions endured by those people who inspired the film.

An unforgiving drama about the cruelty of welfare bureaucracy the film, it starts with 59-year-old Geordie joiner Daniel Blake answering automated questions relating to his health following a heart attack.

Daniel has been instructed by doctors to rest. Yet since he is able to walk 50 metres and lift either arm as if to put something in your top pocket, he is deemed ineligible for employment and support allowance.

Scoring just three points less than the required 15 he must apply for jobseeker’s allowance and perform and attend a CV workshop while pounding the pavements in search of jobs that he is unable to do and simply do not exist.

“When there is despair, the people from the far right take advantage,” said Loach. “We must say that another world is possible and necessary.”

Donald Sutherland praised I, Daniel Blake as “an absolutely terrific movie that resonates in your heart and soul.”

Mother-of-two Katie is getting the run-around, rehoused miles from her friends and family after spending two years in a hostel.

Both do everything they can to make the best of a bad situation, retaining their hope and dignity in the face of some incredible challenges.

I,Daniel Blake goes on show at Parkway Cinema in Beverley this Friday.