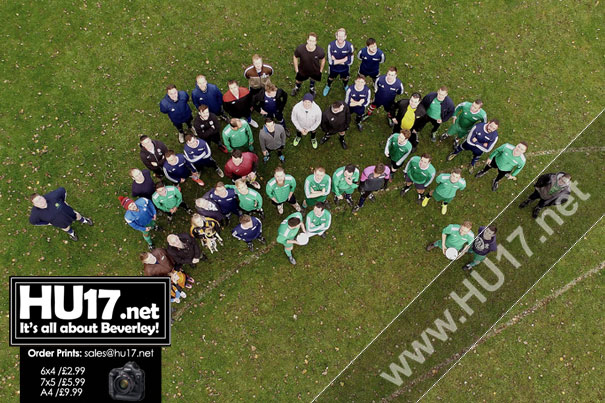 Hammo’s tragic passing just two weeks prior was an utter shock to everybody and for all that knew him, the world is standing still.

Those that came into contact with Tom will agree that he was an absolute one of a kind, a gentleman in the truest sense of the word. His kind nature and willingness to help everybody who crossed his path will leave an unfillable void in so many lives.

Tom was a football man his whole life, a huge Hull City fan and player for both Leconfield Swinemoor and North Ferriby Sporting. With this in mind, it was only fitting that an annual football match be organised in his memory. The teams, Green versus Blue, Leconfield XI vs Hammo Select XI.

Following a minute’s applause in memory of Hammo, the game kicked off on Burden Road, the home of the Humber Colts.

A 30 yard lob from Mike McPherson opened the scoring for Leconfield XI but an exquisite solo performance from Danny Norton levelled before a superb strike from Mark Ricco put Hammo Select ahead before half time.

A second half Leconfield goal from Adam Gibson wasn’t enough as Ryan Overington and Stew Scott both got on the scoresheet for Hammo Select. An incredible second half goalkeeping performance from Hammo Select’s David Butt was enough to see the Blues to victory and lift the first Hammo Legacy Tournament Trophy.

An inadvertent lack of refereeing resulted in some hefty challenges throughout the game, one of which won Hammo Select midfielder, Lewis Wright the coveted ‘Slide Tackle of the Tournament’ trophy – an accolade Hammo would have been proud of!

Another moment of pure brilliance was an Emile Heskey-like performance from Hammo Select striker, Will Brown. On several occasions, Will’s defence splitting pace caused Leconfield problems but following an unfortunate footwear incident, Will had to leave the field before halftime.

Over the weekend, family, friends, spectators and players managed to raise over £900 that has been split between The British Heart Foundation and mental health charity, Mind. If anybody would still like to donate they can do so by following the links on the charities’ respective websites: www.bhf.org.uk/get-involved/donate-form or www.mind.org.uk/get-involved/giving-to-mind/donate.

A huge thank you to everybody that played, organised, spectated and donated to the inaugural Hammo Legacy Tournament and thoughts go out to all family and friends – Diane and Andy, Emma & Kieran, loving girlfriend Amelia, Nephews Seth and Jack and of course his little man, Ringo Starr.