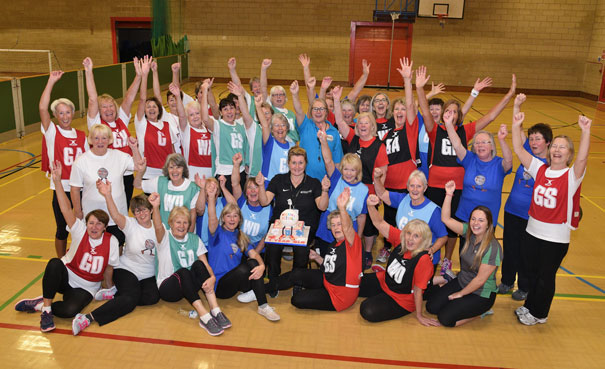 A walking netball tournament has been held to celebrate the first anniversary of the sport being launched in the East Riding.

Teams from Haltemprice, Withernsea and Beverley pitted their walking netball skills against each other in a bid to win top honours in the tournament which was held at East Riding Leisure Beverley almost a year to the day the sport was launched in the area.

Since its launch in the East Riding, by the council’s Sport, Play & Arts Service with support from England Netball local development officer Pauline Hardy, walking netball has gone from being a little known sport, to one which is not only helping women in the East Riding enjoy the game regardless of age or mobility, but one that has attracted national publicity.

Shortly after being established at East Riding Leisure Haltemprice, the team were invited by England Netball, the organisation responsible for promoting the sport nationally, to take part in their national publicity campaign to encourage others to discover the benefits of walking netball.

The sport has gone from strength to strength ever since, with teams starting up in Withernsea and Beverley with the continued support of Reckitt Benckiser Netball Club, and new sessions about to start in Goole.

“The launch of walking netball in the East Riding has proved to be incredibly popular, with the sessions attracting growing numbers of women wanting to get fit and meet new people while having fun and enjoying sport.

“Walking netball is just one of a number of sports and activities available to East Riding residents thanks to the work being done by the council’s sport, play & arts service with the aim of encouraging everyone, regardless of age or ability, to get active.”

The joint winners of the anniversary tournament were the two teams from Haltemprice, with Beverley gaining third place.
Sport and active communities officer Sarah Johnson, of the Sport, Play &

Arts Service, said: “Bringing all the teams together for a Tournament like this was the perfect way to not only celebrate the launch of the sport in the East Riding, but to celebrate all that the ladies who have taken part in the walking netball sessions have achieved over the past 12 months.

“It has been incredibly rewarding to see how the sport has grown locally and we look forward to continuing to help it develop, with the support of England Netball, in the East Riding so increasing numbers of ladies can reap its benefits.”

Walking netball is aimed at ladies who want to re-discover their love of netball or try the sport for the first time regardless of age or ability. The game is similar to mainstream netball but played with adapted rules, to suit all levels of fitness or mobility.

The sessions form part of the council’s Let’s Get Moving Programme, a mobile sports and activity programme, funded by the council’s adult services, aimed at promoting independence, increasing activity levels, and reducing isolation by offering fun and informal activities for adult aged 50+, and adults with a disability, across the East Riding.