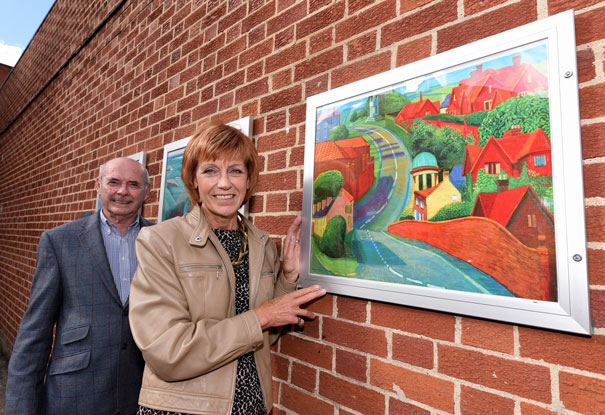 Some of the most famous works by local artist David Hockney are breathing new life into a pedestrian lane in the centre of Beverley.

He has had major exhibitions in California and the Royal Academy in London, which have always proved very popular. Some of his works are permanently on display at Salt’s Mill, Saltaire, in West Yorkshire.

Beverley Civic Society, in partnership with Beverley Renaissance, has for many years been working to improve the state of the pedestrian lanes in the town centre. The latest to have improvements is Golden Ball Passage, which runs between Toll Gavel and Walkergate (between Boots and Clarks).

Golden Ball takes its name from the brewery that once stood there – the new houses called Brewery Mews record this past history.

The improvements to the lane include lighting, name plates at both ends of the lane, and three showcases that are intended to have changing displays, for the enjoyment of the many people who walk the lane. The first display is of three Hockney prints, Garrowby Hill, The Road Across the Wolds and The Road to York through Sledmere.

Mike Hildyard, vice chairman of Beverley and District Civic Society, said: “The civic society has been working towards making the lanes more attractive, with regular meetings with council officers organised by the renaissance partnership.

“Narrow Racket was the first scheme with artwork provided by local schools.

“There are a number of pedestrian lanes in the centre of town, which are not regularly used, and some are not immediately apparent for pedestrian access. Our intention is to make them more popular and interesting to walk down.

“There are a number of stakeholders involved, from street cleaners to street lighting and highway engineers as well as private owners whose permissions have to be sought. This is a slow moving and complicated communication exercise managed by the renaissance officers, but promoted by the civic society.”

Beverley Civic Society is grateful to East Riding of Yorkshire Council, Beverley Renaissance Partnership and Beverley Town Council for their enthusiastic help in these improvements.

The art installation was funded by Beverley Civic Society with support from Beverley Renaissance Partnership in 2016.

“Through Beverley Renaissance Partnership, the council is pleased to have supported this excellent initiative by the civic society to improve this well-used pedestrian walkway.

“A display of David Hockney’s work will be an excellent addition to the public art scene in Beverley which is already home to a number of pieces of public art, including the Elwell Trail which displays the works of Fred and Mary Elwell.”