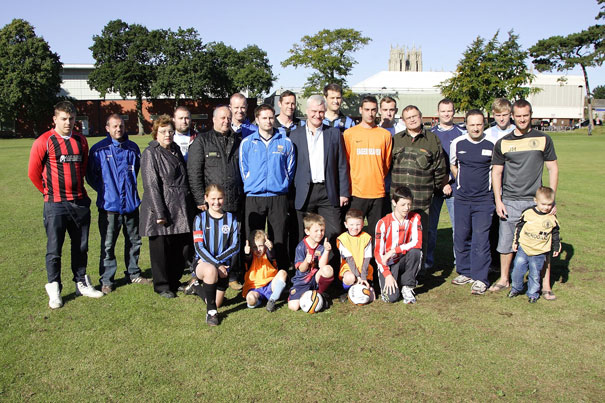 Around four years ago MP Graham Stuart along with local councillors, Cllr David Elvidge , Cllr Dominic Peacock and Cllr Elaine Aird met with a number of football teams with regard to the lack of pitches in Beverley.

Thanks to wonders of Facebook and their Time loop I was reminded of a photo call that at the time felt like it was the start of something positive for grass roots sport.

Coming together at the Beverley Leisure Centre, clubs representing all ages and both sexes explained how the lack of pitches and the state of them is making it hard to play in Beverley.

Strangely while I recall this meeting of officials and local clubs, I can remeber the TV interviews and stories of the promise to do more, but we have in fact done less.

At the time, Mr. Stuart, a keen sports fan himself said that ‘Club officers had written to him with concerns over a lack of access to sporting facilities in the constituency.’

While much was discussed, four years on, there are fewer pitches in Beverley with some clubs still being forced to travel outside of Beverley just so they can play.

Some clubs have long since moved away, with Hull being the choice of location for a few reasons including the cost of pitches or just not being able to get one.

In those four years a lot has changed. The Beverley Leisure Centre has seen an increase in capacity following its third investment in recent years.

Part of that project saw even more parking added at the cost of pitch space with one of the adult pitches being reduced in size to accommodate cars.

Around about the same time, the same town officials visited the all-weather pitch which was located on the Swinemoor Estate. At the time, there was talk of returning it to the community and holding coaching sessions working with local club the Humber Colts.

Where that facility was is now a new development offering housing and care to people who need it, a great scheme, but as one resident described it ‘They Robbed Us of Our Open Space.’

Over the road the Flemingate shopping centre has opened, houses have been built, but local field sport continues to suffer as land is swallowed up for development.

Furthermore, a point worth noting for everyone in Beverley is that during this period Beverley Town Football Club won two major titles and also a national cup, all of which went totally unacknowledged by local officials.

With the UK ranked third in Europe when it comes to having an overweight population, over two-thirds of men and half of women clinically are overweight, exercise is fundamentally important to tackling this issue.

As the town of Beverley continues to evolve to encompass modern life, past times that are enjoyed by thousands of people every single week continue to be neglected.

You may not kick, throw, chuck, hit or run after a ball, but you will certainly know people who do, and they all need somewhere to play.