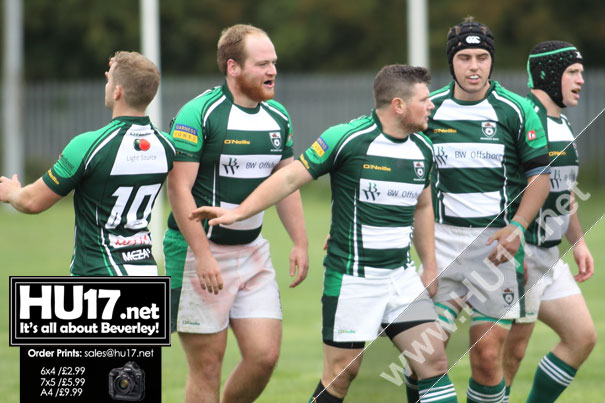 Beverley RUFC put last Saturdays disappointing performance at Hullensians behind them as they picked up their third win of the season away at Keighley.

Keighley’s wide pitch is clearly ideal for the type running rugby which Beverley like to play and they responded magnificently to deliver their best performance of the season so far.

Keithley played well in every aspect of the game and, to their credit, Keighley played their part, but they simply had no answer to Beverley’s speed and handling.

Things looked good for the Beavers from the second minute when they won a lineout on halfway, Isaac Keighley broke strongly up the middle and then slick passing along the back line resulted in a try far out for Rob Smith which Phil Duboulay duly converted (0 – 7).

Although Keighley were looking strong in the set scrums, taking three against the head, Beverley dominated the lineouts. Another slick backs move next saw James Graham speed over for a try which Phil Duboulay again converted (0-14)

Shortly after Keighley were awarded a penalty for Beverley not releasing in the tackle and Alex Brown converted (3 -14). Phil Duboulay was on the ground at this point and unfortunately had to be helped off with what appeared to be a rib injury. A second penalty to Keighley was converted by Alex Brown (6 – 14) and Keighley were edging back into the game.

Beverley RUFC hooker Sam Fell was replaced by Barney Carter and, from a good break in midfield by scrum half Will Harrison the ball was switched across the back line from right wing to left wing Luke Hazell who beat three men to score a superb try which Rob Smith, in the absence of Phil Duboulay, calmly converted (6 – 21).

Keighley obviously received a strong pep talk at half time and came out for the second half looking a stronger team. 10 minutes of Keighley pressure finally broke down the Beverley defence and resulted in a try by the strong running Ben Blackwell which was converted by Alex Brown (13 – 21).

Beverley hit back almost immediately. From a line out on their own 22 they set up a driving maul taking them into the Keighley half when firstly Alex McPeake then Will Turnball took on to slip the ball to James Graham to score the Bonus point try (13 – 26).

A deliberate knock on brought a yellow card for Alex Brown and a penalty for Beverley which Rob Smith converted (13 – 29). Keighley again hit back and the impressive Ben Blackwell kicked a penalty (16 -29)

Will Harrison then sealed the game for the Beavers with a try converted by Rob Smith (16 -36) although Keighley did score on the final play of the game with a try by Alex Brown (21 – 36).