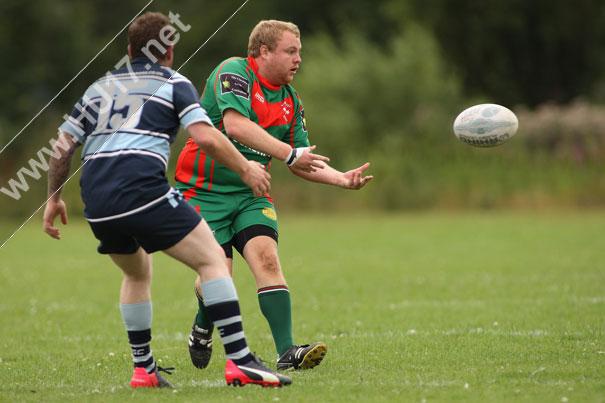 The blue and golds kept the pressure on their rivals at the top end of the Premier Division with this comprehensive away win against their local rivals last Saturday.

They welcomed back Tom Radley, Tom Shires and Sam Roe and Steve Connolly into the ranks in a strong looking 17 man squad despite Alex Calvert, Tom Moor and Lewis Poskitt all being away.

The opening 15 minutes saw Beverley appear to look a little tentative often spilling possession early in the tackle count. However, they got off the mark after a quarter of an hour when Radford’s break sent Tom Radley away who in turn fed Liam Frenneaux to score in the corner.

Soon after Radley broke away got a pass to Frenneaux whose pass found Tom Shires, who was unlucky to be held up over the line.

On the next play, the ball was shipped out to the left for Sam Roe to score again in the corner. The
conversion was again missed as the swirling wind made kicking very difficult all afternoon.

Five minutes later things got worse for the home side as they lost the ball driving it away from their own line. Chris Johnson snapped up the ball and went in under the posts for Poskitt to convert.

Five minutes from the break the home side looked dangerous, but a kick went straight down the throat of Chris Johnson, who held off the chasing cover to score a 60 meter try. Right on the stroke of half-time Billy Riby intercepted but could not escape the cover. A quick play the ball saw the ball shipped out for Liam Frenneaux to score behind the posts. Poskitt converted.

Shortly after the break Connor Dickinson pulled back a try for the hosts, but it was short respite. An offload from Jack Howdle saw Steve Connolly go in under the posts with extras added. A speculative kick then bounced cruelly for the home side, and Tom Radley took advantage to score behind the posts with the extras again added. A Keiron Sparks try pegged thing back for Wyke before a Ryan Davaney kick to the corner was pounced on by Josh Poskitt for a try.

Again, Wyke pulled back a try in the shape of Danny Rumkee with 15 minutes to go before a final burst of scoring for the visitors. Deft handling sent Josh Poskitt over in the corner before Liam Frenneaux danced his way through a tiring defence to complete his hat-trick and a man of the match performance.

As the final whistle approached a handling error by the visitors saw Owen Barker Jones pick the ball up to score, and with extras added peg back the score to 50-18.

Pat Howdle just urged all his men to keep things going and tie up fourth spot at least if not higher.
This coming Saturday they are at home to another local rival Norland Sharks kicking off at 2.30pm, A big crowd is hoped for with the climax to the season approaching. Beverley ‘A’ also travel to York to face Heworth ‘A’ kicking off at 2.30pm.

Beverley ARLFC will hold their fifth annual sports dinner on Saturday November 19th at Lazatts, Cottingham. The event will this year incorporate the club’s end of season awards.

This years guest speaker is to be Adrian Morley of Great Britain, Leeds, Sydney Roosters, Warrington and Salford. Tables (£300 for a table of 10) and tickets priced at £32.50 are now on sale.