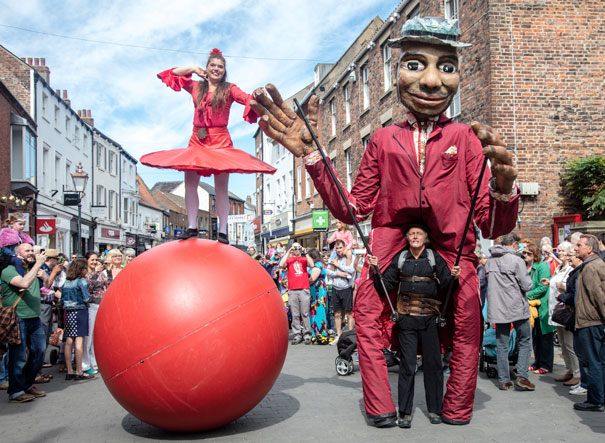 Thousands of people flocked to Beverley at the weekend for the tourism award winning Beverley Puppet Festival.

In what proved to be one of the hottest weekends of the year, the Town Centre welcomed over 80 artists from across the UK and three puppet companies from Europe. The results were spectacular, with free street acts entertaining large crowds across the town.

Venues involved in the festival included the Masonic Hall and Beverley Friary plus newcomers East Riding Theatre and Parkway Cinema, with many shows selling out to packed audiences.

The new Flemingate Centre was one of the main sites for free outdoor shows and anyone visiting the Town Centre would have been bowled over by the sight of the dancing giant puppet brought over by the Netherlands’ Compagnie With Balls.

The Festival Hub in Friary Gardens was buzzing with people enjoying refreshments from Bellissama Delights and TC Patisserie and the bar provided by the chaps behind Beverley Real Ale Festival, who stepped in at last minute after a Hull brewery pulled out only days before.

Of the many puppets at the Friary, one that proved very popular was the rarely seen Beast of Borneo, from Headstrung Theatre’s Cryptid Petting Zoo, who particularly enjoyed being groomed by younger audiences.

“I am thrilled that our very small core team, supported by many more partners and volunteers on the weekend itself, appear to have successfully pulled off the largest Puppet Festival yet in Beverley.”

“We couldn’t have wished for better weather – and a lot of very positive feedback has been received.”

“This festival has always intended to inspire people, to open up imaginations and, very importantly, to spread a little happiness. I hope we have succeeded in this while also increasing town trade.”

“I would like to thank the public for raising over £622.16 towards the festival in street collections and heartily thank our funders Arts Council England and East Riding of Yorkshire Council; our main sponsor East Riding College; our venues and all the artists, volunteers, venue managers, traders, hosts, technical and film crews, suppliers and of course all audiences who supported this event – the world’s largest festival of predominantly British Puppetry.”