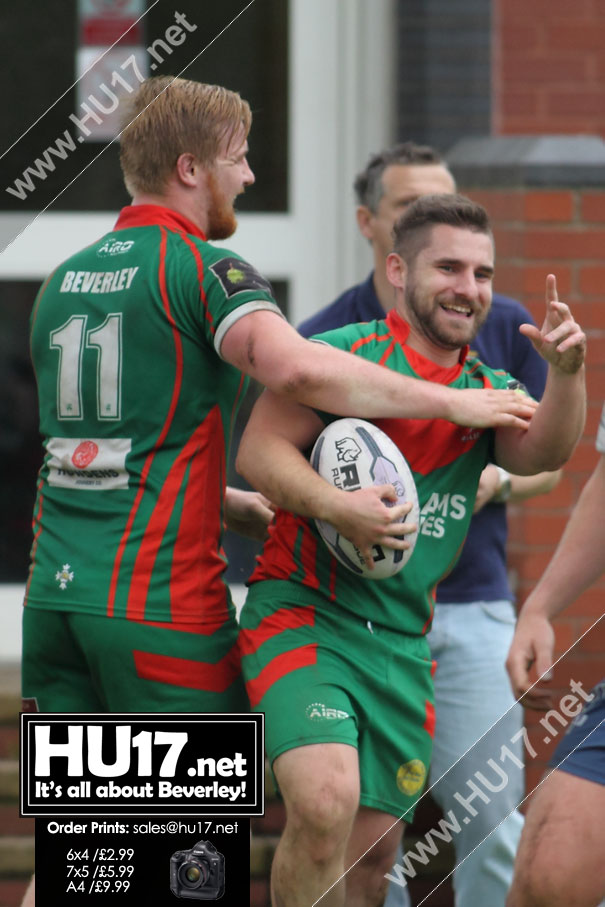 This was a very pleasing afternoon for the blue and golds dispatching their opponents from the West Riding with ruthless efficiency.

The visitors, despite their lowly position in the table are clearly an improving outfit and score-line perhaps did not do them justice. However, every chance that the home side did create was clinically converted into points. At same time some attractive rugby was served up.

“In over two years of been here that’s the most professional performance that I have seen.”

“Some great tries but a clean sheet in defence for the second half pleases me.”

The early exchanges appeared to be very even with both sides giving the ball plenty of air. The hosts took the lead after 7 minutes with crisp passing to the right sending Tom Shires over in the corner for Bobby Howdle to convert. The visitors hit back, and a bomb failed to be diffused.

The extra set of six saw them take advantage, and Braydon Hunter crossed for a try of which the extras were added. Then as Beverley countered Pete starling then put James Sewell away but was stopped with a dangerous high tackle. The resulting extra set and field position saw Pete Starling get over the line but was unlucky to lose the ball.

Moments later Tom Radley did well to slip a ball to Alex Calvert and send him over with extras added. With half-time approaching the home side extended their lead. Jack Howdle slipped a pass to Ryan Davaney, who did well to spin in the tackle and score. Howdle again converting.

The early minutes of the second half saw the visitors pressure the Beverley line. They forced a line drop-out and some sterling work in defence, an area in which Tom Moor was outstanding all afternoon, kept Mirfield out. Having weathered that early onslaught the home side countered. Ryan Davaney went close to scoring before quick ruck speed saw Alex Calvert slip a reverse pass to send Tom Shires over for his second, and extras were added.

Beverley then had to withstand more pressure close to their own line again doing well to deny the opposition points. They then managed to regain some field position and fluent handling to the left sent Pete Starling over. The spirited Mirfield outfit continued to throw the ball about refusing to go into their shell. However, they got a little too adventurous, and a kick went straight into the hand of Glen Anfield 70 meters out and as so often, his pace left the opposition for dead. Anfield converted his own effort.

Right on the stroke of full-time as Mirfield continued to throw caution to the wind but Jake Hart-Fisher intercepted on half way and galloped away under the posts. He converted his own effort to round off the afternoon’s scoring.

Chris Johnson deservedly took the man of the match award in a difficult vote. Ryan Davaney, Alex Calvert and Tom Moor were constantly in the thick of the action. Also Billy Riby looked a constant threat when joining the line from full back.

Prior to the main event Beverley ‘A’ also defeated Myton ‘A’ 20-18. Craig Morfitt, Josh Milner and long range effort from Jamie Cadwellender weighed in with tries. Ryan Watkin added four goals the last of which was a penalty that clinched the win late in the game.

There is no first-team game this weekend for Beverley but Beverley ‘A’ will be taking on Bentley ‘A’ at home. Kick off is 2.30pm at the Beverley Leisure Centre.