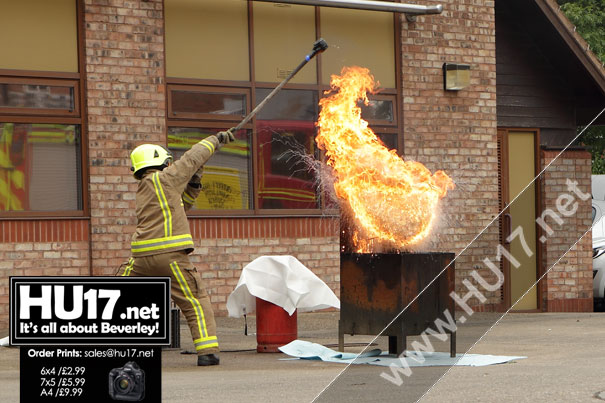 An estimated 2,500 people attended the recent open day held at Beverley Fire Station as residents were given to chance to see what Humberside Fire & Rescue Service do.

On the day visitors to Beverley Fire Station were given the opportunity to see firsthand how the crews managed the range of situations they are called out to deal with.

On display was a whole Varity of equipment used by Humberside Fire & Rescue Service that the public were able to look around.

“Days like this are important for the residents and council tax payers of Beverley so they know what the Fire Service does and what they add to the community.”

For the Humberside Fire & Rescue Service the event also gives them the opportunity to enforce safety messages within the community, Mr. Harrison added;

“Community Fire Safety is the “Buzz Word” for the day. The demonstrations showed the effects of throwing cold water on a burning chip pan.”

“Road Safety with a full RTC extrication drill also showed how we would set about cutting someone free from being involved in a road.”

Good weather helped with visitor numbers, something that was reflected in the fund raising efforts, Mr. Harrison added;

“We raised over £500 for the Fire-fighters Charity and £1000 for The Red Cross Fire Victim Support as well as a tidy sum for Yorkshire Air Ambulance.”

“This could not have been done without the support of local businesses who kindly donated prizes including a Swatch Watch from Guest & Philips and a Pandora Bracelet from Hugh Rice.”