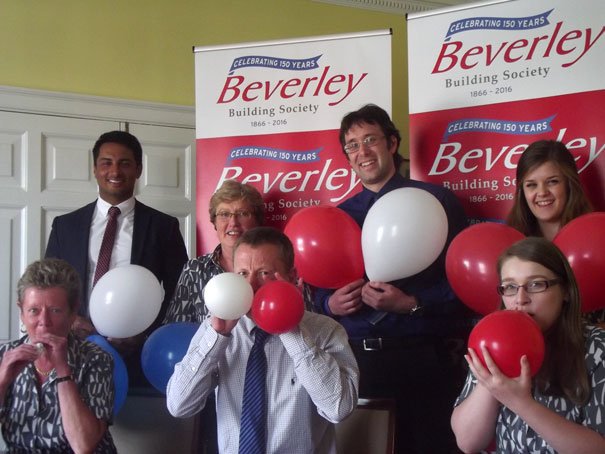 As part of this year’s celebrations to mark the 150th Anniversary of Beverley Building Society, one hundred and fifty balloons will be released at 2pm on Saturday, 18 June at Beverley Folk Festival which takes place at the Racecourse.

Tickets attached to the balloons will include prizes for the first five people to return to the Building Society in Saturday Market to claim.

“We have supported Beverley Folk Festival for the last few years. It is always a great event as we get to see lots of our members and friends enjoying themselves in a relaxed atmosphere. The great thing about the festival is there is always something for everyone.”

“As we are celebrating this year, we will be releasing 150 balloons across Beverley Westwood which will make a wonderful sight.”

“Anyone who finds a balloon should return it to the Building Society in Saturday Market, as soon as possible to claim their prize.”

“The balloon release will include prizes from the Society’s money boxes to cash in an account and other surprises. Look out across Beverley and surrounding areas for the red balloons in the sky.”

“We have a number of events planned this month to celebrate our 150th Anniversary and in addition to the Folk Festival, we have organised a members’ dinner on the 23 June which will welcome over 200 guests to celebrate with us.”