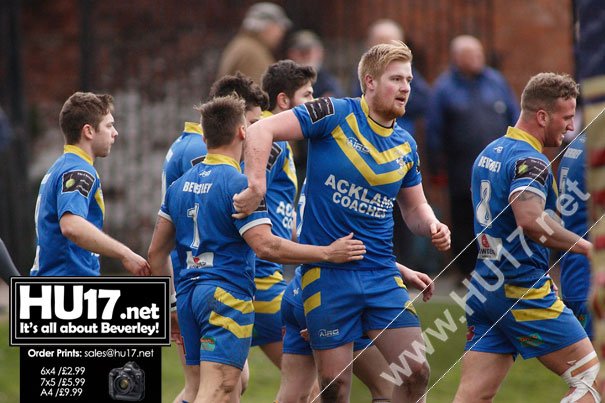 Coming off the back of two successive defeats this was an important fixture for the home side. They needed to get back to winning ways but also go into next weeks 40/20 cup final on the back of a win. Pat Howdle and Scott Taylor had Jack Howdle, Sam Roe, Tom Radley, Josh Pooley and Louis Hubbard all return to bolster the side.

The strength of Beverley’s side on paper aligned to their opponents lowly league position suggested a convincing win for the blue and golds but it proved to be hard work. The home side at times attempted one pass too many when a more patient build up would have perhaps done the trick. However, in defence the hosts appeared to have all the answers, and the Hull outfit rarely looked dangerous even when gaining repeat sets and sustained spells of pressure.

Beverley were on the scoreboard as early as the 2nd minute. The visitors spilled possession and Tom Radley snatched the ball to score under the posts for Josh Poskitt to convert.

The home side attempted to turn the screw early and another attacking set saw Sam Roe unlucky to be held up over the line. Not converting pressure into points appeared to be an ongoing theme for much of the half whilst defending appeared near flawless.

It took until the 38th minute before Josh Pooley was sent away, and he got a neat pass away to Sam Roe. Roe did well to take the tricky pass and crossed in the corner. Josh Poskitt obliged with the difficult conversion for a 12-0 interval lead.

Much of the early part of the second half was frustrating for Beverley. Chances went begging. One attacking set ended with Steve Connolly losing the ball with the line beckoning and later a kick ahead by Lewis Poskitt saw him obstructed, but the resulting extra set came to nothing. Midway through the second half Tom Radley was sent to the sin-bin for ten minutes for use of the elbow.

The visitors were unable to profit from the numerical advantage seemingly not having enough guile or craft to prize open a very well organised home defence.

Beverley went close to scoring again when Tom Moor sneaked out of dummy half only to have the ball stolen when stretching out to score. Beverley again failed to take advantage of the penalty and repeat set. A penalty goal from Josh Poskitt put the game to bed in the 68th minute.

Then another very sharp break out of dummy half by Tom Moor saw his pass find Ryan Watkin in support. Watkin did well to hold off the chasing cover and cross under the posts. Poskitt addded the extras.

Alec Hardie (senior) scored a late consolation try for Hull Wyke wide out on the stroke of full-time to peg back the score to 20-4.

Ryan Watkin took the man of the match award for a non stop display topped off with an important try.