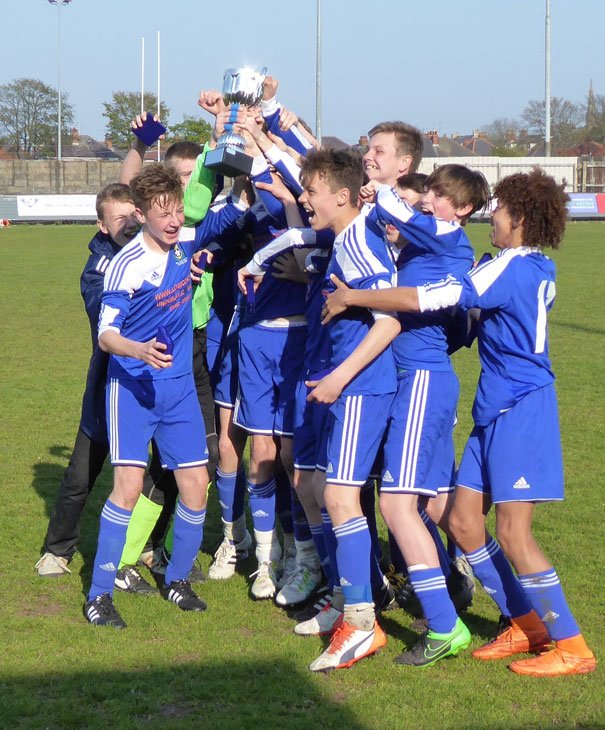 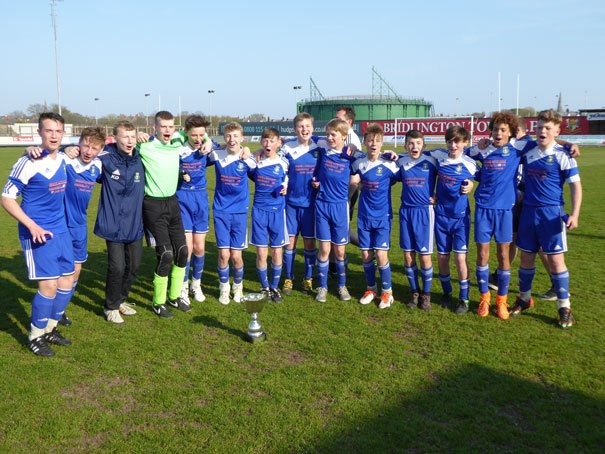 That first triumph seemed written in the stars twelve months ago, though to repeat the feat against worthy opponents in Scarborough Athletic would require hard work, organisation and not a little wizardry. These characteristics were demonstrated in spades against the seasiders, who were dangerous on the break and looked capable of snatching victory themselves until the Wizards’ late winner. This was a proper football match, full of fire and determination from both sides. Every player on the pitch did themselves credit.

Sadly, Jamie Pettigrew missed out due to a knee injury. Both he and Lloyd Bean had played their part in previous rounds and are thoroughly deserving of honourable mentions. The management team of Chris Sadler and Karl Douglas resumed duties in what can now best be described as the lucky dugout.
Both sides’ league form has been indifferent of late, no doubt with an eye on this match as Myton League safety was secured some weeks ago. Each had won their away fixture during the regular season and was confident of victory.

The Wizards seemed to be more purposeful as the match started, though no clear cut chances fell in the first period of the match. Eventually Scarborough’s physicality saw them concede a couple of free kicks mid-way inside their half. From Danny Wilson’s flighted delivery Cody McLaren challenged the Scarborough goalkeeper, saw the ball fall loose and tapped the ball into the unguarded net only to be flagged offside. Harry Sadler forced a save from just inside the box following a mazy run. Matty Blake continued to bewilder defenders from the right wing position, combining well with both Max Wright and Ben Gillyon who supplies a series of crosses into the danger areas. On the left, George Addison and Edward Chappell interchanged constantly in attempts to force the breakthrough.

The searing heat necessitated a drinks break in each half, allowing both sides to regroup, though few chances fell until later in the second half. From one through ball Cody’s deft first touch allowed him to muscle past the last defender and sprint towards goal. He took aim from outside the box. The ball beat the keeper but hit the bar, and was eventually booted away to safety.

Now Scarborough possess a centre forward of real menace. Quick, strong and determined, he represented a continual threat to the Wizards’ hopes of success. Adam Prince matched him for pace and marshalled him superbly. Supported in the centre of defence by Zac Wise the pair repelled an increasing wave of attacks as the second half progressed and extra time loomed.

Scarborough were taking the game to the Wizards and looking to win the game in 70 minutes. It was now their turn to pepper the box. It seemed their chance had arrived when a low cross from the right evaded all but an incoming attacker on the left, who met the ball strongly on the run. All observers waited for the ball to hit the back of the net, yet out of nowhere came Isaac Adnitt to produce a magnificent save and deny what would surely have been the winner.

Reprieved, the Wizards began to surge forward. Joe Douglas was tireless in the middle of the park throughout. As the final seconds ebbed away it was his midfield partner, Will Webb, who strode towards goal and unleashed a low firm shot from outside the box. Despite the keeper’s desperate dive the ball nestled in the bottom corner to the delight of the Wizards and despair of Scarborough.

Only seconds remained and the final whistle blew. This really was a tremendous game, and commiserations to Scarborough on playing their part.

Moreover, retaining this trophy is a fabulous achievement. Well done the Wizards!