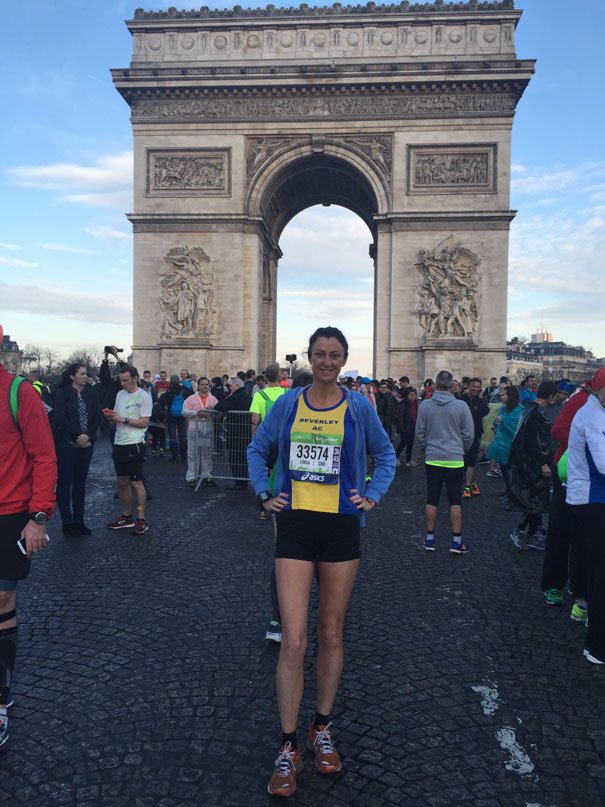 A Beverley runner has had major success in the 2016 Paris Marathon. Linda Wright, in only her second marathon, came 466th in her age category at the event run in early April.

With over forty three and a half thousand runners, the Paris Marathon is one of the biggest races in Europe and is bigger than the London event at the end of this month.

Linda had a time for the 26.2 mile course (42.2km) of three hours fifty four minutes. Her overall placing put her in the top quarter of all the runners including the men.

“It was a great event” said Linda “very friendly but still competitive. There were runners from all over the world including Africa and America. Quite a lot of Brits do the run as it is easier to get into than London”.

The Paris Marathon takes in all the major sites of the French capital, it starts on the Champs Elysees and you run past the Place de la Concorde, the Notre Dame Cathedral and the Eiffel Tower before finishing at the Arc de Triomphe.

“With all the sites we passed I am surprised I did such a good time, there was plenty to see! It was very hot around 21 degrees at one point, which made it hard but I still got a PB. Slower runners did hold me up at the start but I soon got into my rhythm. My favourite part was running through the Bois de Boulogne, the Parisians version of Hyde Park, just before the end.”

Linda is a member of Beverley Athletic Club and has only been running for just over two years.

“I started just running around the block, literally a couple of miles and then did the Great North Run. My husband encouraged me to join the Club and I have not looked back.”

“Not only did it introduce me to a lot of new friends, my times have tumbled and I have found a sport I really enjoy.”

“I now want to concentrate on getting my event times down further so that I can qualify for other marathons and races around the world, but before that it’s the York Marathon later in the year!”