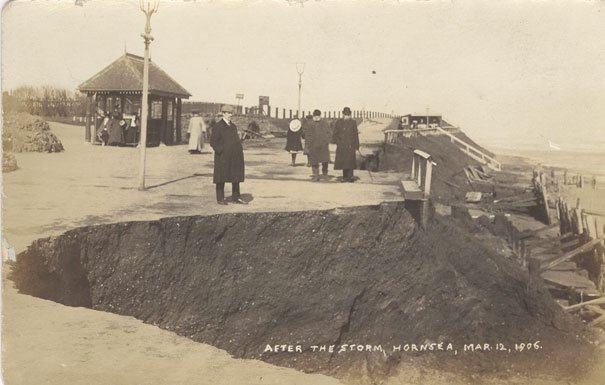 It is fair to say that this winter, so far, could be summed up as generally wet and wild, rather than cold and frosty.

Instead of the cold weather normally expected at this time of year, the UK has been subjected to storm after storm of various names and sizes. Up to now, our part of the world has remained relatively unscathed by the damaging nature of these storms.

But East Yorkshire has seen its fair share of weather-related damage in its time, both in recent memory and long into the past. One way to find out about this is by looking into the East Riding Archives, preserved at the Treasure House in Beverley.

In here are historic documents and photographs that give a tiny glimpse of what our ancestors had to put up with in stormy times like the ones we face today.

One such storm (that might ring bells with anyone who is familiar with the tidal surge that struck the Humber estuary in 2013) occurred 90 years ago when, on 12 March 1906, a tremendous storm hit Hornsea, and combined with unusually high tides to flood the area between the Mere and the sea, washing away the entire Promenade Gardens and smashing the town’s sea defences, known as Groynes.

Some 13 years earlier, Withernsea bore the brunt when a ship called the ‘Henry Parr’ collided with the pier in stormy weather, smashing it to pieces in a shower of sparks on 22 November 1893. If anyone has ever wondered why Withernsea has two stone towers presenting a bizarre entrance to the beach …this is all that now remains of the pier following its spectacular destruction.

Going back further through the archives to 1660, there is evidence in a parish church register for North Dalton which reads “upon Saturday night betwixt the hours of ten and three of the clocke… a most violent wind happened which brought much prejudice unto the people of North Dalton, and other places of the contrey”.

Readers can only speculate as to the extent of the damage caused to the village, and over in Patrington in November 1740, their parish registers show that “a storm or hurricane from the north, that continued about twelve hourse, did great damage both by sea and land.”

Archivist Sam Bartle said: “Finding evidence of wild weather events does involve a bit of a trawl through the records, but you might want to go online to check out our new East Riding Archives page on Flickr, where you can see a sample of photographic archives connected with stormy weather.”