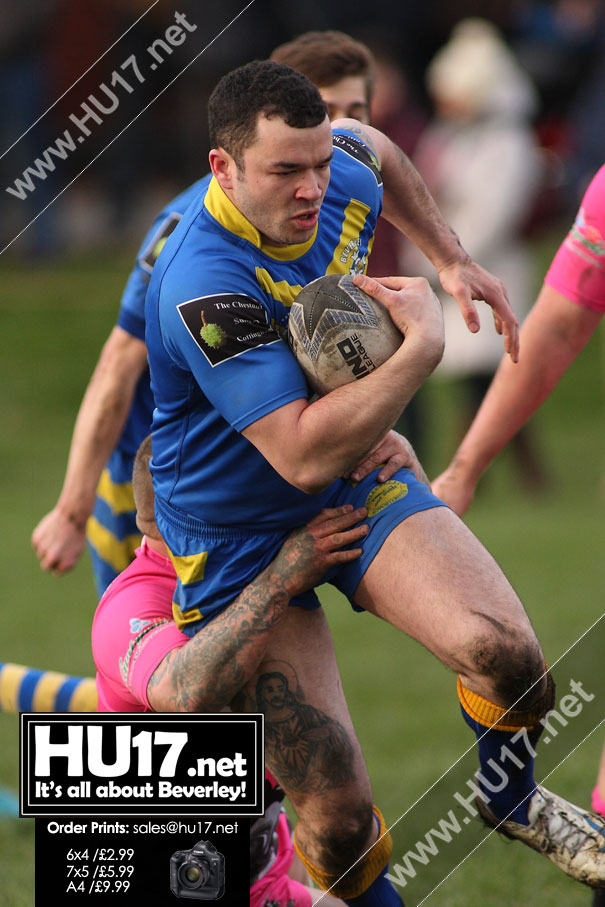 This was a very pleasing afternoons work for the blue and golds in this pre-season friendly, which was the clubs first outing since early September 2015 as they hosted the Scarborough Pirates.

However, both sides will have plenty to build on in an entertaining encounter in the February cold at the Beverley Leisure Centre. The Scarborough Pirates fielded a very strong and physical pack which attempted to steamroller its way over the opposition. Beverley appeared to have all the answers in a very sterling defensive effort.

They also appeared the more fluent side in attack with Lewis Poskitt and new signing Jimmy Walker forming a very lethal half back combination. There always seemed to be that bit more creativity from the home side. The hosts were also ably led by Tom Radley, who took out the man of the match award with a real captains knock in the second row.

Beverley were on the scoreboard very early in the 4th minute. The ball as kicked ahead on the last tackle and following some scrappy play and some indecision by the visitors, Ryan Watkin hacked the ball on and regathered to score wide out. The conversion could not be added. The lead was increased midway through the first half following some classy play from half backs Walker and Poskitt. They combined to send an inside ball to Glen Anfield, who then slipped a ball to Tom Moore, who dived over beneath the posts for Anfield to convert for a 10-0 lead.

The Seasiders enjoyed plenty of possession for the rest of the half with a number of repeat sets close to the Beverley line. It was certainly all hands to the pump for the hosts up until half time, and they showed a spirit that bodes well for the season ahead.

Beverley were on the scoreboard very quickly in the second half when they forced a Scarborough handling error with strong defending. The possession from the resulting scrum saw Jimmy Walker send Glen Anfield ghosting over for a try too wide out to be improved. The blue and golds attempted to finish the visitors off for the rest of the half but were frustrated.

The referee on three occasions pulled play back for forward passes when Beverley were in the clear and scores look certain. Scarborough managed a few sorties down the Beverley end of the field but came away empty handed. They managed to deny Beverley any further points up until ten minutes before the end. Walker and Joe Morley combined to send Jake Hart-Fisher, who reveled in his greater involvement in the middle of the field, crashing over wide out. Bobby Howdle on this occasion added the extras.

Scarborough were awarded a string of penalties in the closing stages of the game and managed a consolation try right on the stroke of full time. This was converted, and the home side were denied a clean sheet which looked very likely for much of the second half.

These two sides will meet again at least twice in the Yorkshire Premier Division this season. This Saturday, in what will be their final pre-season outing, Beverley will tussle with National Conference Division One outfit Myton Warriors. Kick-off against the formidable Hull outfit will be 2.30PM at the Beverley Leisure Centre.