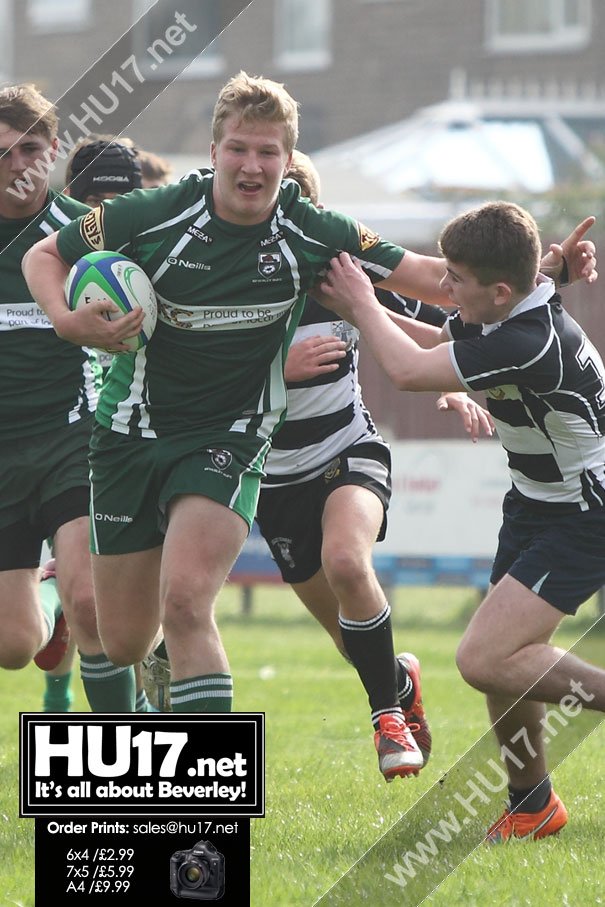 Beverley travelled to Malton and arrived to find the pitch in appalling condition. Wet Icy and probably not fit to play on. All the conditions to suit the Malton style of play. A close forward driving game!

Malton kicked off with the slope and within seconds everyone was playing patty cake in the mud.
Although a strong forward side it was Beverley who enjoyed the majority of the opening play. However because of the conditions the ball was spilt by both teams on a regular basis and several promising moves came to nothing being victim to the icy mud bath.

However, after ten minutes a long relieving kick was collected by Luke Hazell around the halfway line. With very little of their players directly in front of him, he sidestepped to the left. Beat the first couple of players and then it was a foot race to the line. This he duly won touching down in the corner. The conversion was missed (5/0)

Further pressure by Beverley resulted in a scrum on the Malton five meter line. This was picked up from the base of the scrum and Alfie Hart Fisher went in for Beverley’s second try. Almost impossible kicking conditions meant that the conversion was again missed (10/0)

The rest of the half turned into a muddy slog and it was with some relief that the half came to an end
The second half started with optimism by Beverley who indeed struck first. This time after good forward play the Beverley backs combined well to allow Harrison Mayou to give an audacious dummy. This was bought by the entire Malton backline and he slipped over the line untouched. The “normal” kicking conditions applied; no chance. (15/0)

What followed next was a bit bizarre but definitely aided Malton. First one penalty was given then the next and the next and the next. This allowed Malton sustained possession and with this kind of decision making they marched up the field and duly drove over for their try. Unconverted (15/5)

Having allowed a score past them Beverley picked up their play and were in the Malton 22 when Rob Cunningham injured his back. Play was stopped and ten minutes later whilst waiting for an ambulance the decision was taken with 15 to go to move to a different pitch.

This pitch made the first one look like Twickenham. Pitch two had even more bogs and mud. Although Beverley pressed the Malton line there was no further score and the final whistle blew Beverley running out comfortable winners in a game easily forgotten.

This now means that Beverley colts have gone through the first half of their season unbeaten in the league and are well placed for the rest of the season.