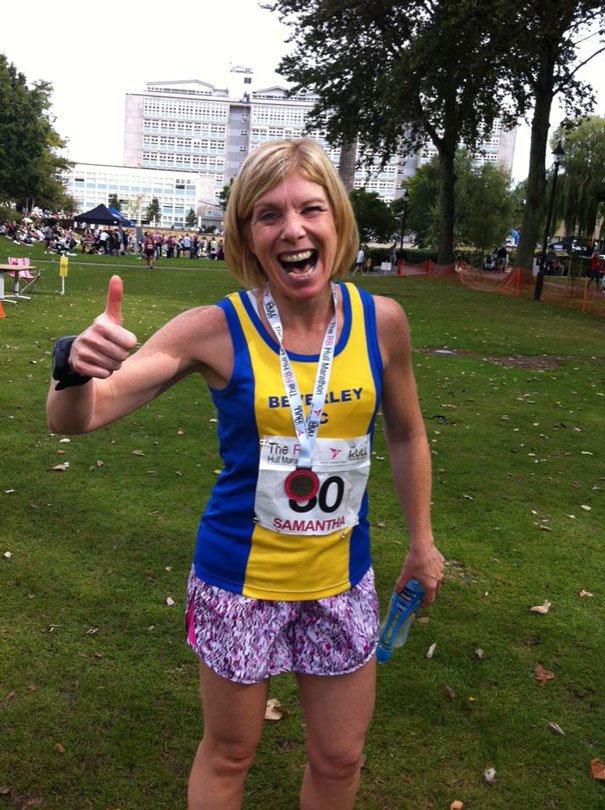 Last Sunday was a huge day for Beverley AC as they took on 2 great challenges. The inaugural Hull Marathon proved to be a storming success.

A carnival atmosphere was created around the race start at the Wilberforce monument and in Queens Gardens and the excitement grew as the 9.00 a.m. start approached. The 26.2 miles race commenced from the monument before taking a left over Drypool Bridge and out onto Holderness Rd, through East Park and then back along James Reckitt avenue to near the start.

The West Hull section took in the KC stadium, the Humber Bridge, Hessle town centre, Pickering Park and an intriguing section around the grounds of Sirius Acadamy which actually took you indoors through the entrance lobby!

Then the race went on to Hessle Road, before winding through the docks to the Marina. Initially perfect weather for running, the heat cranked up at the hardest section of the course, the uphill stretch between 12 and 17 miles up Boothferry Rd and over the Bridge and back, but overall conditions suited good times on this fast course.

Runners were also boosted by the appearance of The Red Arrows who flew low straight down Boothferry Rd with just under 1 ¾ hrs gone.

14 members entered the full marathon and many more entered the relays as teams of 4, each taking a leg of the course.

First club woman back was Sam Allen. 3rd in the F40-44 group she clocked 3:28:35, only around 4 mins slower than her PB. Miranda Hunt pulled off a PB in 3:47:11, beating her pre race prediction by over 10 minutes. Neil Bant’s training had been limited by other commitments so his time of 3:48:41 was all the more impressive for that.

Fiona Oakes confirmed her full recovery from serious leg wounds in a bike fall earlier this year. Overcoming the disappointment of missing the Manchester Marathon as a result, she missed out on a Sub 4 by a mere 36 secs but was nevertheless overjoyed to pull off such a good time in her debut marathon. Andy Grainger surprised himself with a time of 4:04:59 which he put down to doing some serious hills in the Yorkshire Dales and Lake District on a recent Holiday. Chris Dunn picked up cramp in the last 4 miles but still managed 4:25:23.

Unfortunately, Jeremy Beesley had a bit of a nightmare succumbing to cramp twice in the last 6 miles and ending up walking a lot of it as a result. And finally, club stalwart Frank Harrison, competing on no specific marathon training at all and entering just a few weeks before the race, managed to take first prize in the 75+ age group in 5:51:09!

In addition a number of members took part in the relays and also thoroughly enjoyed the event. The race winner was Matthew Jones in 2:35:28 and winner in the women’s race was Helen Mulhall in 3:01:33; There were 790 finishers overall.

Away from Hull, The Great North Run saw 12 members enter this iconic event. Rob Gray pulled off an impressive time of 1:29:43 to be first Beverley runner to get to the finish at South Shields.

Paul Evans cemented his return to full fitness and was delighted with his time of 1:50:02. Jim Harbidge maintained his consistent good form for a time of 1:45:26 and Catriona Williamson has improved immensely this year; this was confirmed as she clocked 2:21:46.