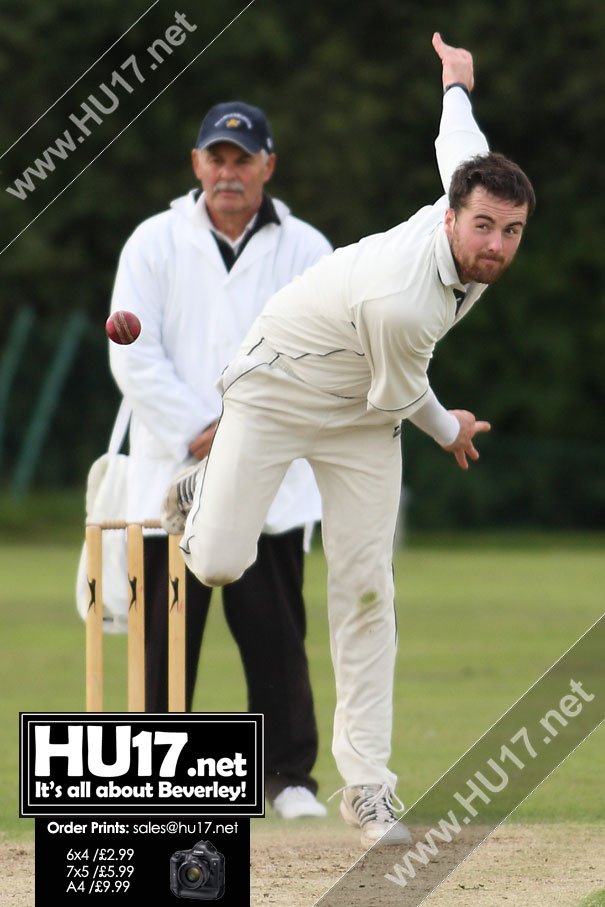 Again the hopes of the Beavers automatic promotion hopes rested in the hands of the other top sides in the division, Beverley went into the fixture wanting to win to apply some pressure to the likes of Hessle and South Holderness.

Beverley lost the toss and were asked to bowl against a Brandesburton team that had used the leagues loan rules to enable the fixture to take place. Usual opening pairing of Nelly Graham and Kieran O’Brian got Beverley off to a good start and immediately had the away team under pressure.

With only 14 runs coming from the first 10 overs Beverley were well on top despite not dismissing the steady Stu Robinson. O’Brian bowled his 12 overs straight through for another good performance taking (2 for 32).

Captain Nightingale introduced himself with Beverley looking to make the breakthrough and bowled his usual mixed bag and ended with (2 for 33). Charlie Bough also backed up his excellent spell last week end with another sturdy middle over spell. Nelly Graham then returned to slow the tail finishing with (2 for 46).

Brandesburton ended with 199 from their 45 overs with 3 run outs also preventing them from passing 200.
In reply Ben Fish and Dave Parry got the innings off to a good start with Fish in particular playing some aggressive shots in the early exchanges to try get Beverley on the front foot.

However both perished along with Thompson in quick succession leaving Beverley in trouble. With the Beavers run chase struggling it was left to Captain Nightingale and Harrison to get the innings back on track, they soon put on a partnership of 80 thanks to some excellent running in between the wickets to get Beverley back in the game. Just when both players looked like they would knock off the remaining runs they were both dismissed Nightingale for (38) and Harrison for (43).

The experienced pairing of Tim Fordon and Richard Simpson continued the good work of the previous pair and prevented the Brandesburton attack from gaining the upper hand. Fordon finished with 35* and Simpson 34* to cap off an excellent middle order performance to take Beverley home.