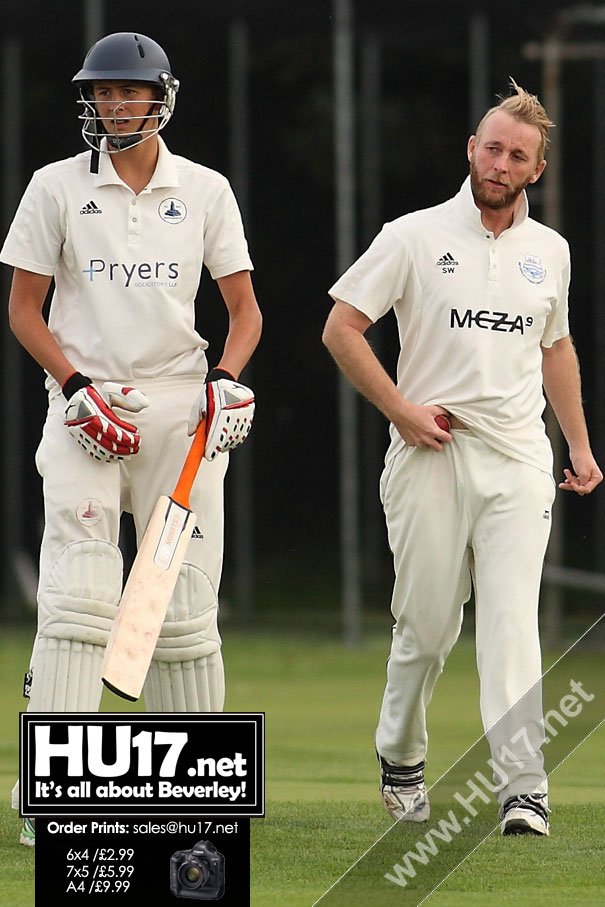 Joe Ashdown was on record breaking form on a day to remember at Clifton Alliance and for the first time since the beginning of June there was no change among the sides chasing the Hunters York & District Senior Cricket League Premier Division title as the entire top six maintained their positions in the table.

Ashdown’s innings of 177 not out was not only the highest recorded in the top flight in 2015, but his fifth century of the campaign saw him break the record for the most runs in a season which had stood for 14 years. The previous best set by Australian Ben Higgins also from Clifton Alliance was 1207, but that looks set to be eclipsed as the new mark already stands at 1250 and there are still four rounds of matches to play.

York were the opposition as the home side scored 339-3 with Kevin Bradley (81) also contributing to the mammoth total. The visitors replied with 136 Alex Renton finishing with figures of 6-41, and had it not been for a last wicket partnership of 74 to which Chris Burn contributed an unbeaten 36 the margin of victory would have been even greater.

Mark Fisher (107) and Louis Foxton (109no) both scored centuries for Sheriff Hutton Bridge allowing the League leaders to declare on 278- 3 away at Fenner. The hosts could manage only 140 in reply as Stephen Croft took 4-63 and Fisher 3-19 whilst Callum Hellwig remained unbeaten on 45 as the visitors made it back to back wins to maintain a slim lead at the top.

Scarborough stay in second place following a five wicket win over Heworth. Theo Smith the hero taking 5-49 before leading the hosts to victory with an unbeaten half-century. Neil Johnson made 51 in the visitors’ total of 199 which also included 34 from Ian Lynch. The home side did not have things all there own way after Alex Carrie departed for 39, but they eventually reached their target with a couple of over to spare Kristian Wilkinson (36no) helping Smith secure a fourth straight win.

Woodhouse Grange were denied a fifth consecutive victory but bowled 15 overs in 35 minutes with the weather closing in to ensure a result against Fenner. Free from the pressure of captaincy Andrew Bilton made 87 and Chistopher Suddaby 70 not out for the home side as they scored 235-5, who looked on course for maximum points when Grant Van Es came to the crease with the total on 78-6 but he proved to be a thorn in the reigning champions side and was unbeaten on 37 seeing out the closing overs with No11 Mark Johnson the visitors finished on 141-9.

Dunnington’s Jake Murphy produced his season’s best taking 5-40 to help bowl out hosts Beverley Town Cricket Club for 131, Tom Loten (3-10) was also in the wickets whilst Jonathan Fisher top scored with 44. Loten also contributed an unbeaten 29 but it was a half-century from Jack Bolam which laid the foundation for the six wicket win.

Easingwold closed the gap on visitors Stamford Bridge as the sides vying for the final promotion place went head to head. Kyle Waite continued his outstanding run of form, which has seen him unbeaten in his last five innings, scoring 102 not out for the home side whilst sharing stands of 108 and 83 with Joshua Geenlay (44) and Matthew Trunbull (54) respectively in a total of 245-5. Paul Skilbeck (4-51) took the first four wickets after the interval but could not dislodge opener Stuart Boyle, who eventually fell for 67, as the visitors took a share of the points having reached 187-7 by the close.

Acomb got the better of a draw at Studley Royal but were denied a likely victory by a seventh wicket stand of 64 between Anthony Mackle (61no) and Charlie Scatchard (32). The hosts had looked to be in trouble at 77 for 6 in reply to the visitors 191-8 but despite 4-33 from David Sykes they held out to finish on 161-8. Earlier Matthew Dale made 86 and Andy Tute 34 as Glenn Carlton took 3-50.