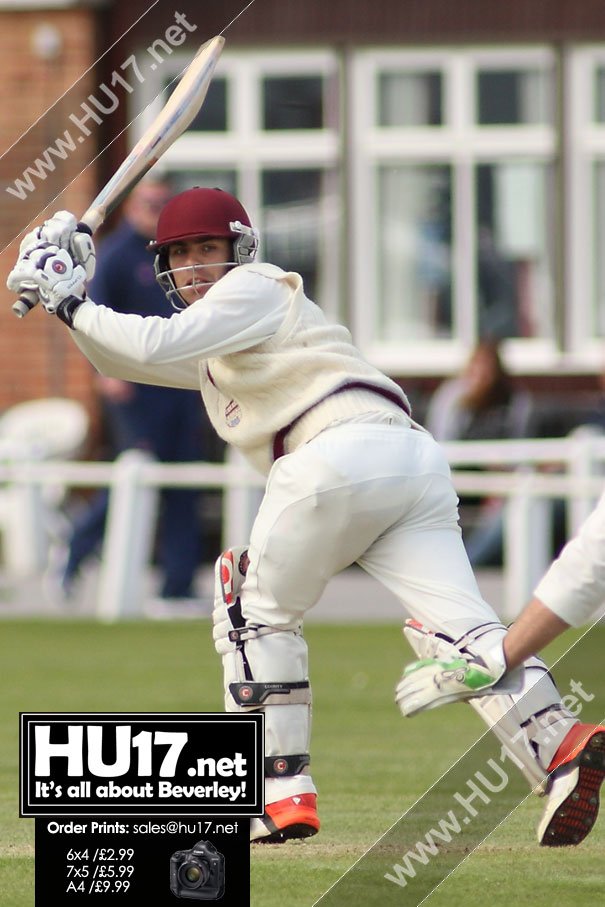 Sheriff Hutton Bridge returned to the top of the Hunters York & District Senior Cricket League Premier Division winning for the first time in four weeks as former leaders Acomb dropped three places, rain robbing them of the opportunity for victory from a dominant position.

Woodhouse Grange and Scarborough both improved their positions in the title race whilst Stamford Bridge are left looking over there shoulders in the final promotion place after failing to win for the fifth week in a row.

Russell Robinson was on top form with both bat and ball for the new leaders, an unbeaten 49 guiding them to victory by six wickets at home to Beverley Town Cricket Club. Andrew Burton top scored for the visitors with 42 and Charles Fish made 38 out of a total of 180, as Robinson took 3-26. Mark Fisher (40) and Rob Pinder (40) set the home side on their way whilst Matthew Mudd (3-47) kept the visitors’ hopes alive before Robinson and Eddie Barnes (33no) completed the victory.

Another all-round performance this time from Woodhouse Grange’s Tom Young helped the defending champions record a fourth straight win, the latest coming at title rivals Stamford Bridge. Stuart Boyle (42) and Richard Robinson (33) scored the bulk of the hosts disappointing total of 122, Josh Jackson taking 3-8 and Young 3-28. The visitors lost only two wickets in reply before skipper Andrew Bilton, with his second consecutive half-century, and Young with an unbeaten 42 saw them home.

Scarborough were made to work hard for their third straight win at bottom of the table York in a low scoring match. Sam Beales top scored with 40 in the hosts total of 105, Jack Holt (5-39) and Ryan Gibson (3-34) doing most of the damage. However the visitors did not have things all their own way Matthew Hodsdon taking three of the six wickets to fall in the chase.

Dunnington recovered from last week’s surprise defeat against Fenner to inflict a fourth consecutive defeat on Heworth. Jack Spofforth (4-49) and Dave Brent (3-10) combined to dismiss the home side for 141, however they fought back reducing the visitors to 111-5 but were unable to dislodge Jack Bolam (40no), he and Collis King securing a victory which sees the side from Common Road strengthen their promotion push.

Acomb were left to rue their misfortune after rain curtailed the match against Hull Zingari with the home side just three wickets away from victory, the visitors in deep trouble at 79-7 replying to 195. Earlier Joe Dale (90) hit the day’s highest individual score and Scott Nicholls made 40, whilst Matthew Wilkinson produced an outstanding performance taking 6-33 for the visiting side. Guy Martinson made 37 in reply but Andy Tute (4-21) and David Sykes (3-32) had their opponents on the rack when the weather intervened.

The match between Clifton Alliance and Easingwold was evenly poised when it too was abandoned due to heavy rain. The visitors replying to Alliance’s total of 181-9 had reached 128-6 but with both Mark Mierwinski (68) and Kyle Waite (46) both back in the pavilion the initiative perhaps just lay with the home side. Earlier Will Scholey with 64 and Scott Hopkinson (32) had helped their side to a respectable total as Paul Redshaw (4-39) and Stephen Piercy (3-50) enjoyed success with the ball.

Fenner continued their recent run of good form with a seven wicket win at home to Studley Royal, Paul Scrowston’s innings of 78 off 80 balls the stand out performance of the match. Grant Van Es (5-41) was the hero in the first innings as despite 49 from Dan Craven the visitors were bowled out for 144. Scrowston shared half-century partnerships with both Will Parker and Ross Davy to set up the hosts’ third straight win.