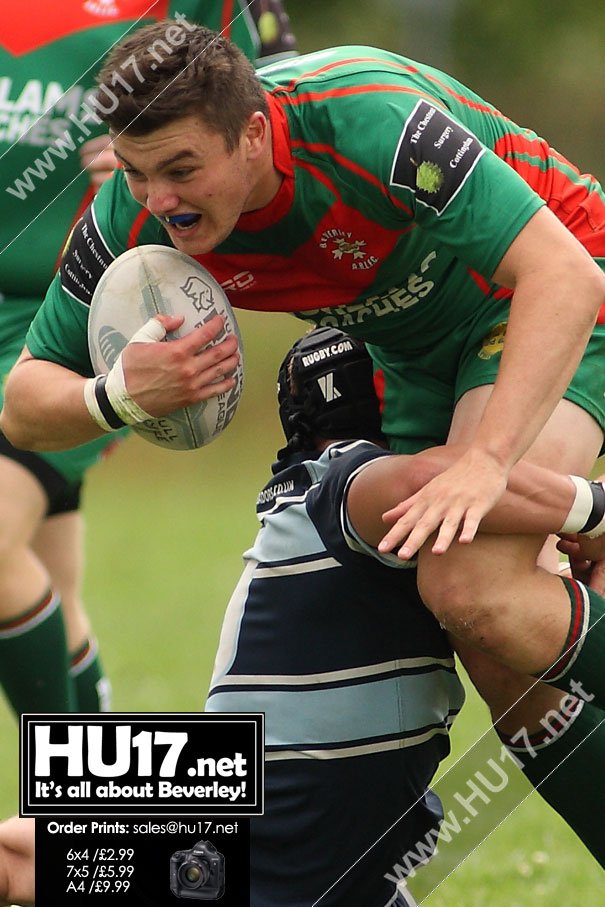 The blue and golds were edged out in this thrilling see-saw encounter in Hull last Saturday which saw the lead change hands on six occasions. There was little to separate the two sides with perhaps Wyke’s game management just edging Beverley’s individual talent.

Beverley started brightly and a break from deep inside his own half by Jack Howdle saw him brought to ground five metres out. A quick play the ball saw Jack Humphries score in the 6th minute and Bobby Howdle tacked on the extras. Hull started to enjoy some improved field position aided by a string of penalties which payed dividends when a chip into the in-goal ares saw them pounce to score with 15 minutes on the clock. Jack Howdle once again produced something special. A break from deep inside his own half saw him feed Mike Cooper who backed himself to round the chasing cover and score beside the posts for Howdle to convert.

At 12-4 up the visitors looked confident but in the last ten minutes of the half the home side stole the lead. They added two tries, both resulting from chips over the top which were regathered for tries. The home side led 16-12 at the break.

Beverley managed to gain possession from a short re-start kick and put some pressure  on the Wyke line but failed to convert it into points. Five minutes later, following a couple of repeat sets on the Beverley line, Wyke scored with a move on the blind side of the scrum. Beverley hit back quickly. The elusive running Jack Humphries added a try before man of the match Jack Howdle evaded numerous defenders before sending his brother Bobby in under the posts. Beverley’s 24-20 lead was soon extinguished when pressure on the Beverley line saw Wyke go over from close range. The extras were added and the home side led 26-24.

There was yet more twists as Jack Humphries completed his hat-trick with an incredible elusive run which saw him squeeze over wide out. The extras could not be added and the visitors led 28-26 in the 63rd minute.

Five minutes later a kick across field failed to be dealt with and the home side pounced to score wide out with the extras added for a 32-28 lead. in the final ten minutes Beverley attempted to score the winner. Jake Hart-Fisher had numerous dangerous runs which almost produced such a winner.

Indeed the home side were hanging on for dear life at times. However Beverley could not get the all important score and will feel dissapointed despite playing their part in a terrifically entertaining contest.

This Saturday Beverley are at home to Bentley Good Companions. They will be looking to avenge a 32-30 defeat by the Doncaster side earlier in the season which saw Beverley denied a point when a last minute conversion from the touchline struck the post. Kick-off is 2pm at the Beverley Leisure Centre.