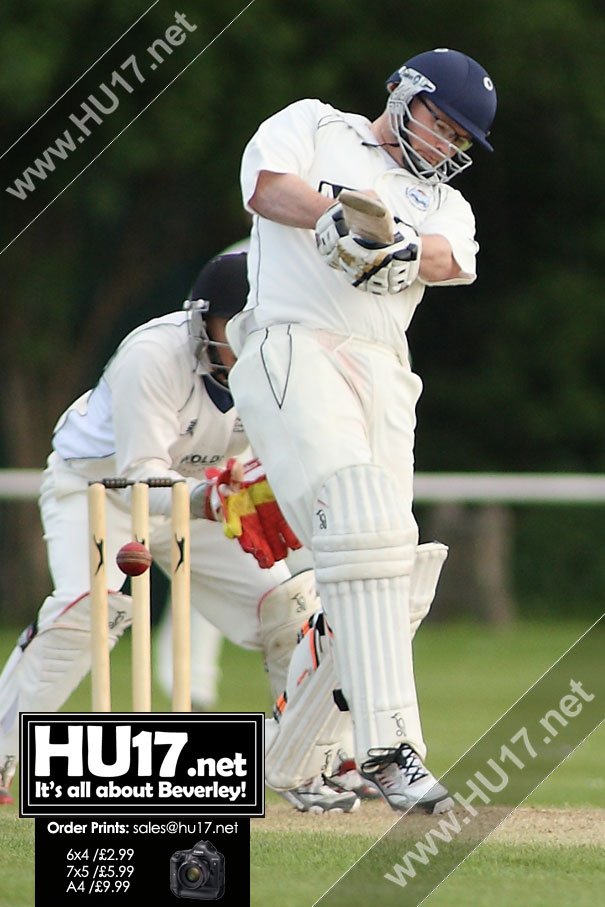 The battle for the Hunters York & District Senior Cricket League Premier Division intensified following the latest round of matches which saw four of the top six go head to head.

Sheriff Hutton Bridge still head the table despite being held to a draw whilst second placed Acomb suffered a first defeat in over two months.

Stamford Bridge slipped two places to fifth as they were forced to bat out for a draw against Beverley Town Cricket Club with nine wickets down. Olly Grantham (83) was the leading contributor in the visitors’ total of 247-6 which also contained 44 from Andrew Burton, Stuart Boyle finishing with 3-56 for the home side.

The hosts got within 16 of their opponents total thanks to Sam Tennant (60) and Tom Hoggard (46), whilst Boyle capped a fine all-round performance with 41 as Matthew Mudd added to last week’s six wickets with 3-62.

Scarborough brought to an end their hosts ten match unbeaten run in the game of the day, their victory by two wickets, at Acomb accomplished with just a couple of balls to spare. A half-century from James Fletcher (56) and 46 from captain Andy Tute the home side to 192-9, Ryan Gibson claiming figures of 3-53. The Yorkshire all-rounder was one four batsmen to pass 30, Neil Elvidge the best with 43 as despite 3-40 from Mark Bell the visitors sealed victory in a thrilling climax.

Dunnington came out best in the days other top six clash as they claimed the best of the draw away at the League leaders. Adam Sutcliffe (68) and Daniel Barrett (40) laid the foundations for the home side before an unbeaten half-century, his third of the season, from Harwood Williams (56no) saw them post 234-6. The home side looked to be in trouble as Jake Murphy (3-65) and Dave Brent (3-58) reduced them to 95-5 but neither was able to breach the defence of Robert Pinder who held things together remaining unbeaten on 78 as hosts closed on 215-8.

Defending champions Woodhouse Grange are up to third after a comprehensive victory over bottom side York by ten wickets. Tom Quinn (5-26) and Christopher Suddaby (3-20) combined to bowl out the hosts for just 84, and it took skipper Andrew Bilton and Nick Hadfield less than 20 overs to reach the target both finishing unbeaten on 40.

Joe Ashdown (145no) scored his fourth century of the season for Clifton Alliance as they scored the day’s highest total, 295-4, against Hull Zingari, Scott Hopkinson also making 62. Alex Renton (3-33) then took three wickets as the away side was all out for 156, Matthew Bunn top scoring with 44.

James Postill took three of the first four wickets for Easingwold as visiting side Studley Royal were reduced to 56-4, and despite Rob Mackle’s 63 they never recovered eventually being bowled out for 140, Postill conceding just 22 runs from his 17 overs. The in form pairing of Mark Mierzwinski (45) and Martyn Piercy (41) both produced solid performances to ensure there were few alarms as the hosts wrapped up a third successive win with almost 20 overs to spare.

Fenner ended a 14 match winless run with victory at a Heworth side struggling following the departure of two of their leading batsmen. No longer able to call on the services of Oliver Sherwood and Tom Neal the home side could manage just 108, Richard Walton top-scoring with 37 as Luke Laybourne (5-36) and Steve Sergeant (3-27) dominated proceedings. The visitors didn’t have things all their own way losing four wickets before reaching their target, Ben Hadfield top scoring with 27.