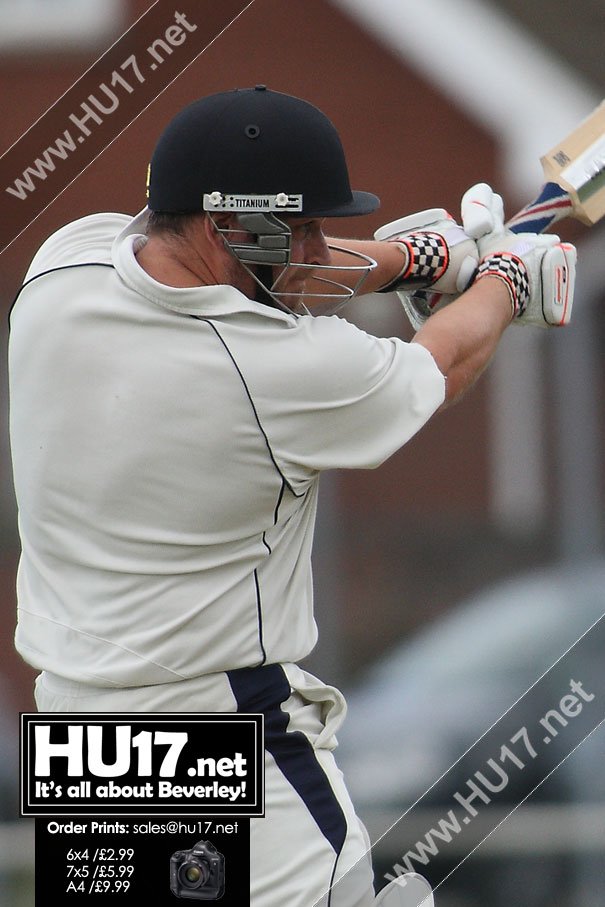 Only Woodhouse Grange of the top five in the Hunters York & District Senior Cricket League Premier Division had much to cheer on a damp Yorkshire Day as they won for the first time in three matches, whilst their main challengers were all left to ponder what might have been as rain ended hopes of a positive result in matches involving all the other top sides.

Leaders Sheriff Hutton Bridge got the best of a draw at home to title hopefuls Scarborough, Robert Pinder (84) and Paul Scaling (47) helping the home side reach 241 despite Jack Holt’s third five wicket haul of the season the seam bowler finished with 5-48 and was well supported by Theo Smith (3-69). The visitors were never in a position to challenge for victory Stephen Croft picking up 4-42 as they reached 125-6 as the game ended in stalemate.

Acomb remain second but were denied the chance of victory, visitors Clifton Alliance ending on 129-8 in reply to the home sides’ 182-7. Skipper Andy Tute (45) top scored for the home side as Scott Hopkinson returned figures of 4-51, but whilst Joe Ashdown led the reply with 46 three wickets each from Andrew Brewster (3-27) and David Sykes (3-38) almost secured what would have been a fourth win in five matches.

The match at Low Catton Road between Hull Zingari and hosts Stamford Bridge was intriguingly poised before the weather took its toll. The home side reaching 152-7 but having lost both Stuart Boyle (59) and Tom Hoggard (45) in the process as John Morton took 3-20. That came in response to the visitors177, Jack Storey top scoring with 30 as Matt Beckett (3-36) and Kevin Murphy (3-20) each took three wickets.

Woodhouse Grange’s six wicket win over Heworth in a low scoring encounter saw them climb above Scarborough into fourth place, the only change in the top half of the table. Ian Lynch made 32 before an unbeaten 35 from Dan Walton saved the home sides blushes as they struggled to 129 all out, Josh Jackson (4-39) and Chris Suddaby (3-17) doing most of the damage. Tom Young (50) and Chris Bilton (40no) then saw the hosts home with few alarms despite Graham Knott’s 3-25.

Dunnington remain on course for a top six finish after a comfortable victory at home to Studley Royal. Dan Coad (52) top scored for the visitors but they were restricted to 144, Tom Loten finishing with the days’ best figures of 6-40. Oliver Sherwood continued to impress for his new club with an unbeaten 69 guiding them to victory with five wickets down.

Easingwold remain just outside the promotion places despite winning three of their last four, the latest victory coming away at York. Stephen Piercy with 81 and skipper Mark Mierzwiski (75) provided the majority of the visitors’ total of 220 all out, Gareth Sharpe (5-47) and Hugo Adams (5-25) sharing all ten wickets. Matthew Turnbull (4-17) and James Postill (4-13) responded for the away side as the hosts were bowled out for just 91, Ben Horseman’s 38 the only bright spot for the home side as they replaced Beverley Town Cricket Club at the foot of the table.

The former bottom placed side recorded back-to-back victories for the first time this season by beating hosts Fenner by four wickets. Graham Williamson (41) top scored in the home sides’ 164-9, which the visitors overcame thanks to Jonathan Fisher (37) and Robert Fish (35).