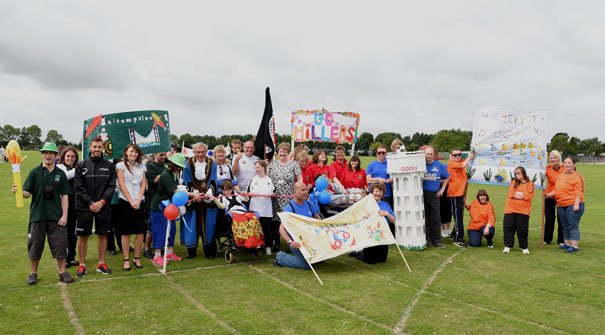 A school playing field was temporarily converted into a sports arena, complete with banners, flags and a mock Olympic torch, to host the annual East Riding Legacy Event.

Over 200 adults with learning and physical disabilities, from day centres across the East Riding, competed in such sports as frisbee golf, volleyball, tennis ball throwing, and wheelchair obstacle racing during the three-day event.

The event, held at Longcroft School, in Beverley opened with a procession led by Chairman of the East Riding of Yorkshire Council Councillor Peter Turner and representatives from day centres in Beverley, Bridlington, Driffield, Goole, Haltemprice, Holderness, and Pocklington waving flags and banners in their team colours.

For the third year running Priory View, in Bridlington were crowned overall winners at the end of the event, with Millers, in Beverley coming a close second, and Waterview Lodge, Driffield coming in third place.

The annual event was launched in 2012 to tie in with the London Olympic Games and is organised in partnership with Longcroft School, East Riding of Yorkshire Council’s adult services, business management, and sport, play and arts service.

“It’s wonderful that we can provide opportunities like the Legacy Event that everyone can take part in regardless of ability.”

“I know that everyone involved in the Legacy Event puts a lot of time and effort into making it happen and I would like to congratulate everyone involved, especially the competitors, their supporters, staff, and volunteers, for ensuring that this event has remained a true Olympic legacy.”

Other sports that featured in the event included running, relay racing, football, skittles, Boccia, and Kurling.

On the second day of the contest Hodgsons pub, in Beverley hosted the darts, dominoes and pool tournament as part of the event, while Miller’s Day centre hosted a Wii bowling competition ahead of the games.

“It is always such a lovely event which is well supported. It can get really competitive and everyone who takes part spends a lot of time and effort training for their events which they look forward to all year round.”

“It is all about bringing service users together for a fun and friendly event which everyone has thoroughly enjoyed.”