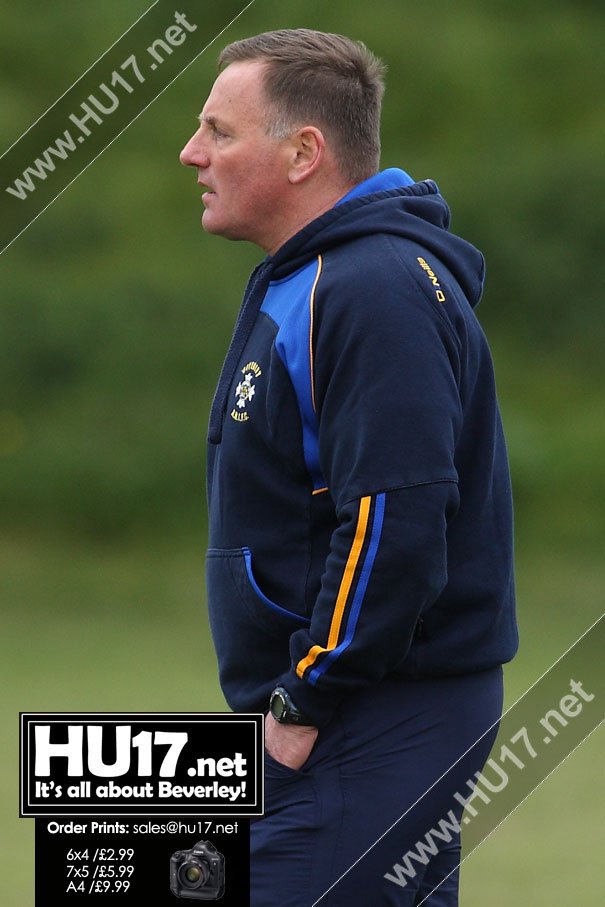 The blue and golds produced a display of clinical finishing to dispatch a struggling but spirited South Yorkshire outfit last Saturday.

Pat Howdle was able to recall some of his main strike players to the side. Glen Anfield returned and helped himself to a hat-trick and also Jack Humphries returned and posted four tries and the man of the match award. Humphries was too hot to handle all afternoon for the home side. Pat Howdle commented;

”It was a pleasing second half, our discipline was a little bit out in the first half but we settled down and in the end I could have not asked for anymore.”

The scoreboard started to tick over very early for the visitors. They scored off their first venture into the opposing 20 meter zone with Humphries dummying and stepping his way to a try under the posts for Anfield to convert. Beverley continued to press forcing a line drop out and the resulting repeat set saw Anfield crab across the field to score in the corner. The extras were not added.

Sheffield had some sizable forwards that occasionally were able to cause Beverley problems. They managed to enjoy a spell of improved possession and territory aided by a few penalties. They pulled back a try mid-way through the half and Steve Connolly vented his frustrations at the referee and had to spend ten minutes in the sin bin.

However this was brief respite for the home side as strong defence by Beverley forced a handling error by the Hawks and Jack Howdle forced his way over in the next set of six. Jack Humphries increased the lead with another typically classy try, stepping his way through the defence. There was then some pressure by the hosts forcing a line drop-out and then scoring a try in the next set. The conversion was added to pull the scores back to 22-10. But Beverley struck a cruel blow with half time fast approaching.

A kick by the Hawks was intercepted by Jack Howdle deep in his own half. He raced up-field. took the cover tackle, and a quick play the ball saw Jack Humphries go over in the next move. Anfield added the extras for a 28-10 interval lead.

The second half was near flawless for the blue and golds as they well and truly turned the screw. Only two minutes into the half a quality set forced another line drop-out and saw Howdle go over from in the ensuing repeat set. Almost straight from the kick off Howdle slipped a pass in his own half and Anfield’s pace did the rest. Humphries then slipped a ball away to Howdle who raced away to complete a hat-trick. Humphries then added his fourth.

There was a brief break in the scoring before Glen Anfield piled on the agony for the hosts with an 80 meter interception try to complete a hat-trick. The final act of scoring featured another ex-Beverley Brave Joe Morley who was making his debut on leave from Sheffield University. As the ball was shipped swiftly to the left, Morley’s long ball found Craig Hancock lurking out wide. Hancock did well to squeeze over the line wide out.

This latest victory has seen the blue and gold move up to fourth in the table. They sit behind leaders Mirfield with York Acorn’A’ and local rivals Hull Wyke lying in second and third place respectively. In this Beverley’s first season in the Yorkshire League coach Pat Howdle was targeting at least a top four finish but a good late run of form could see them surpass that.

This Saturday sees Beverley at home to fifth place Siddal ‘A’ They are looking for revenge from a fortnight age when a depleted Beverley side made the trip to the Pennines and was on the wrong end of a 44-24 scoreline. The match sponsored by SJS Project Services Ltd kicks off at 2.30pm at the Beverley Leisure Centre in a busy afternoon of sport.