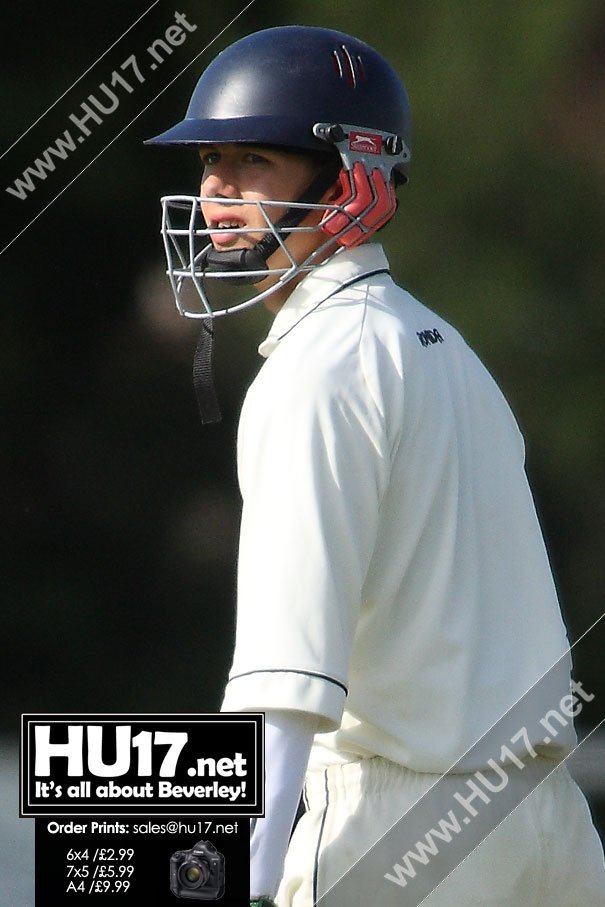 Will Harrison scored an unbeaten 83 as Beverley Town Cricket Club beat Humbleton by five wickets at the Norwood Recreation Ground.

Humbleton who like Beverley have title ambitions of their own were dealt a real blow as Beverley proved to be too good both with the bat and ball.

Going into the day Humbleton were top of the table, by the close of play they found themselves drop down into third place.

Beverley’s skipper Alex Nightingale who saw his side move into second place in the table now feels his side can win the title.

Speaking after the match he said;

“I think we can win the league but we need to continue with the momentum we have right now. It will be tough ask but there will be some twists and turns before the end of the year.”

“It was a good game of cricket and both teams wanted to win. To be fair to Humbleton when we came off for rain they were out of the changing room looking to continue the game.”

Beverley won the toss and put Humbleton into bat, but they were bowled out for just 181 runs. Nightingale says the bowlers helped to turn the match, he said;

“Owen Parnaby and Joey Franklin deserve huge credit for the way they bowled. They showed great character to slow the run rate at what was a tricky time for us, they changed the course of the game.”

In reply Beverley reached the total required with overs and wickets to spare. Their innings was not an easy affair. Humbleton were not going to give up top spot without a fight and the visitors took big wickets early on.

Tim Smith who scored freely last weekend at Hornsea fell early. He was soon followed by Ben Fish.
With so much at stake the pressure showed, Fish challenged the umpire who stood firm sending him back to the dressing the room, commenting on the dismissal a frustrated Fish said;

“I got a bad decision. I was given out LBW but the ball came off the inside edge of my bat before hitting the pad.”

Nightingale tried to rebuild but he was dismissed for 24. Tim Fordon offered little lasting just three balls, going for a duck. Dave Parry scored a useful 21 with Kieran O’Brian adding a valuable 24.

While those around him were falling Harrison continued to play his game, chipping away at the score and in the end seeing Beverley over the line with a fearless innings.

“Harrison was superb. He is someone who plays with no fear and is just enjoying his cricket. That’s two 50s back to back for the thirds. Which is fantastic for someone who is only just 16.”

Now second in the table and just 10 points behind the new leaders Kirkella, Beverley are in a strong position to mount a serious challenge for the title. In their current form they will not be a side others will look forward to facing.

Nightingale while confident still remains calm and focused, he said;

“We have eight huge games left to secure promotion. Had it been offered to us we would have taken this position at the start of the year.”

“We have to now move onto next week, we have to put this result aside and look to do the same against Hessle next week. They are only three points behind us in third place.”