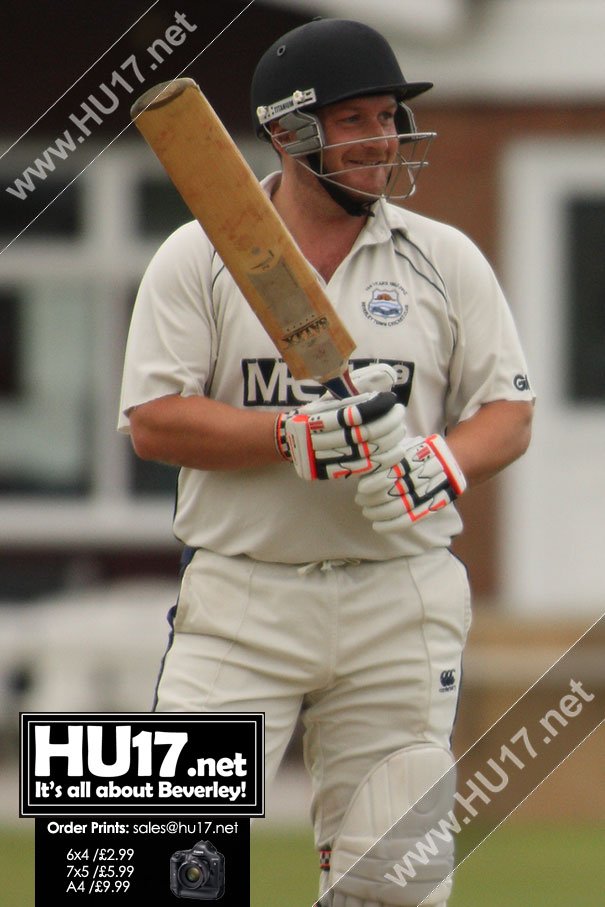 Beverley Town Cricket Club have brought their four game losing streak to an end as they beat York at the Norwood Recreation Ground.

Matthew Mudd had a good day with the ball in hand as he took 6-33 as York struggled to 161-9 despite 57 from Kieron Bloor.

Beverley made light work of the target reaching it with more than 20 overs to spare.

Elsewhere in the league the top three in the Hunters York & District Senior Cricket League Premier Division remained unchanged for the first time in over a month in what has become an absorbing title race.

Sheriff Hutton Bridge were comfortable winners at Fenner, Robert Pinder (76no) and Adam Fisher (32no) guiding their side to an eight wicket win.

That after Russell Robinson (5-45) had helped restrict the hosts to 176-8 which included an unbeaten 61 from Ross Davy an 34 from Graham Williamson. Mark Fisher got the visitors’ reply off to positive start with 43 before the third wicket pair secured a fourth consecutive victory for the League leaders.

Two outstanding individual innings dominated the match at Woodhouse Grange as the reigning champions took on title rivals Acomb. Michael Hattee scored an unbeaten 103 as the hosts recovered from 10-2 thanks to a stand of 128 between him and Nick Hadfield (60), but Andrew Brewster with 5-43 helped restrict the home side to 213-7.

Joe Dale dominated the visitors’ response with his second century of the season, an unbeaten 135 the stand out performance on a batting card were no other batsmen reached 20. Tom Quinn took 4-44 in a losing cause as the home side slipped down to fifth having won only once in their last four, whilst the visitors on an eight match unbeaten run stay second.

Third placed Stamford Bridge made the short trip the fellow promotion hopefuls Dunnington and got the better of a draw as the home sides last wicket pair held out for a share of the points. Sam Tennant’s 113 was the highlight of the visitors’ total of 270-7 which was boosted by Kevin Murphy’s unbeaten 39 at the end.

Dunnington’s reply owed much to their most recent recruits, Oliver Sherwood having signed during the week from Heworth made 30 whilst former Driffield Town skipper Dave Brent finished with 31no, having earlier taken 3-73, and another of the season’s new signings Jake Murphy top scored with 47 as the hosts closed well short of their target on 205-9, Dom Rhodes finishing with 3-24.

Scarborough returned to winnings ways, having lost their last two, beating visitors Clifton Alliance by 49 runs. Yorkshire’s Ryan Gibson (64) top scored for the home side as they were bowled out for 190, Alex Renton (3-55) and Richard Carroll (3-50) both claiming three wickets. Alistair Wray made 44 and Renton 36 in response but Anthony Hunter (3-31) and Jack Holt (3-41) ensured they were never in a position to mount a serious challenge.

Another of Yorkshire’s rising star’s Ben Coad was also in excellent form with the bat making 109 for Studley Royal as they got the better of a draw at home to Heworth. Chris Hill (48) and Dan Craven (40no) also contributed to a total 254-6, Richard Walton finishing with 3-67. Neil Johnson made 62 for the visitors and Salman Syed an unbeaten 40 as they batted out to share the points closing on 198-4.

Easingwold were left frustrated at Hull Zingari as rain robbed them of three overs which could have seen them take the final wicket, the home side finishing on 198-9 in reply to the visitors’ 247-6. Matthew (76) and Stephen (44) Piercy were the main contributors to the visitors’ total as Matthew Wilkinson took 3-56. Matthew Turnbull responded with 3-38 but Jack Storey (72) and Matthew Bunn (31) helped secure a share of the points for the hosts.