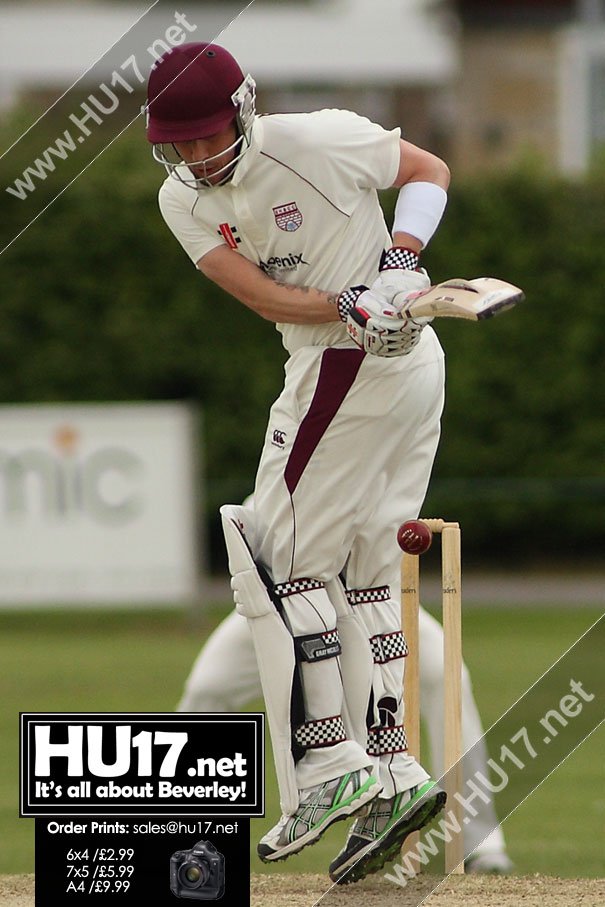 Sheriff Hutton Bridge increased their lead at the top of the Hunters York & District Senior Cricket League Premier Division as nearest rivals Scarborough lost for the second week in a row, but whilst the title race looks set to keep running for a while yet the promotion picture is beginning to look a little clearer.

The League leaders extended their unbeaten run to seven matches thanks to Russell Robinson, who produced the division’s best bowling performance of the season taking 7-29 as Studley Royal were dismissed for 132, despite an unbeaten 48 from Dan Craven and 45 from Charlie Scatchard. That came in reply to the home side’s total of 189 all out, Daniel Foxton top scoring with 55 whilst Steven Walmsley took 5-43.

Hull Zingari produced the days biggest surprise beating former table toppers Scarborough by 209 runs at North Marine Road. Jack Storey (149) scored a second century in three matches and Guy Martinson made 53 before an unbeaten 48 from Matthew Bunn helped the visitors reach an imposing 335-3. The home side responded with just 126, of which Alex Carrie made 71, as the hosts had no answer to Andrew Hamson (6-42) and Matthew Wilkinson (4-27).

Acomb climbed up to second enjoying the better of a high scoring draw at home to promotion rivals Dunnington. Tom Neal, having signed from Heworth during the week, marked his debut with 40 whilst both Andy Tute (77) and Scott Nicholls (65) scored half-centuries in the host’s total of 276-5. Jack Bolam scored the first century by a Dunnington batsman this season and his 134 lead a spirited reply which came within 16 runs of victory, Andy Brewster (4-60) finishing with the best figures from a match dominated by the bat.

Stamford Bridge also moved up a place as they enjoyed a comfortable nine wickets win over Heworth. Dom Rhodes followed up last week’s match winning performance against Fenner with 4-42 and with the help of Matt Beckett (3-25) bowled out the visitors for 106, Oliver Sherwood (48) the only batsman to offer noteworthy resistance. Sam Tennant (31) was the hosts’ only casualty as they raced to victory in less than 25 overs, Stuart Boyle finishing unbeaten on 58.

Long time leaders, and reigning champions, Woodhouse Grange remain in fourth place after they were held to a draw by Easingwold despite the efforts of the division’s leading wicket taker David Suddaby (4-40). For the seventh time this season he finished with four wickets or better and on this occasion took four of the first five wickets to fall but the visitors recovered from 90-5 to reach 179-7, skipper Mark Mierzwinski making 66. That came in response to the visitors’ 232-6 which included a 92 runs opening stand between Andrew Bilton (51) and Nick Hadfield (79).

Clifton Alliance, still with a chance of a top six finish, beat bottom club Beverley Town Cricket Club by six wickets. Despite five wickets from Scott Hopkinson (5-82) the divisions’ lowest ranked side was still able to reach 255-7, Anthony Spence (97) just missing out on a century whilst Jonathan Fisher contributed 60. John Gilham (53) and Kevin Bradley (57) both scored half-centuries but it was a solid performance from the home sides’ top order which saw them reach 257 for the loss of just four wickets.

York II ended a six match loosing streak with victory at home to fellow strugglers Fenner. The home side was indebted to Toby Pratt (109no) and Ben Horseman (81) as they recovered from a poor start to reach 251-7 which included four wickets from Steve Sergeant, taking his tally to 13 in his last three outings. Graham Williamson (43) led the visitors reply but he was unable to prevent Matthews Wright (4-28) and Hodsdon (3-61) claiming victory for their side.