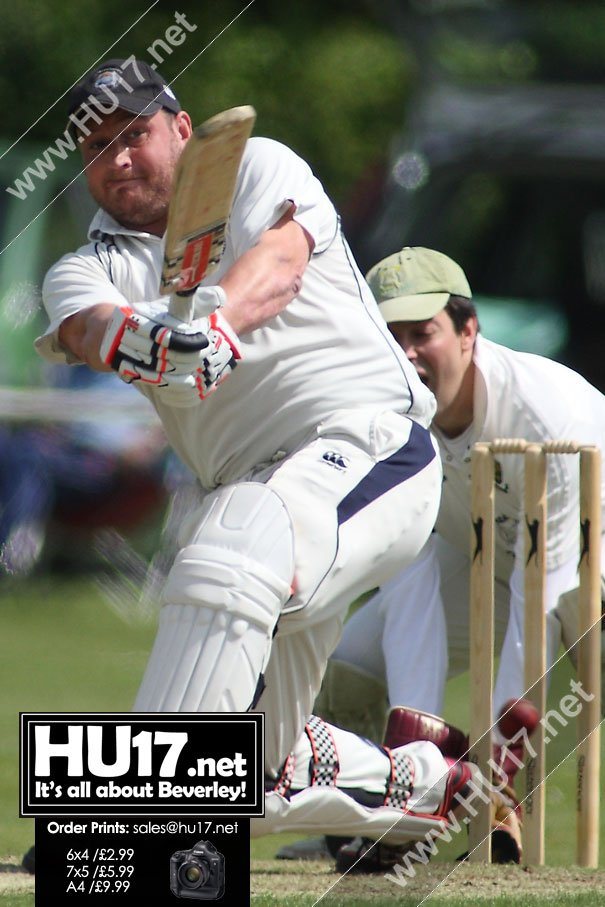 Sheriff Hutton Bridge are the new leaders of the Hunters York & District Senior Cricket League Premier Division as they beat Heworth and Scarborough suffered a shock defeat at home to Easingwold, bringing to an end their five match winning streak.

Mark Fisher was in excellent form for the new leaders as they took advantage of Scarborough’s slip to take top spot following a six wicket win at Elmpark Way. Fisher finished with figures of 6-44 as despite 61 from Neil Johnson the home side were restricted to 173-9, he then led the reply with 79 and with support from Louis Foxton (40) they reached 176-4, Ian Lynch (4-39) taking all four wickets to fall.

The former leaders must have been contemplating extending their recent run of successes as Alex Carrie (124) and Mark Tennant (104no) shard a double-century stand for second wicket out of a total of 251-4, but Easingwold skipper Mark Mierzwinski (104) shared partnerships of 115 and 97 with Stephen Piercy (60) and Martin Piercy (56) for the opening two wickets to set up victory for the visitors.

Dave Suddaby (5-36) and Andrew Horner, with a career best 5-38, shared all ten wickets as Woodhouse Grange kept up the pressure on the sides above them with a convincing vicrtory over Clifton Alliance. The visitors were bowled out for just 93, and then Andrew Bilton (39) and an Nick Hadfield (47no) saw the hosts home with seven wickets in hand.

Acomb extended their unbeaten run to six matches at the expense of hosts Beverley Town. Matthew Dale scored an unbeaten 116 and Scott Nicholls 39 as the visitors scored 171-1, that coming in reply to the home sides 167 with Mark Bell (4-47) and skipper Andy Tute (3-11) doing most of the damage, Jonathan Fisher (32) the only batsman able to offer sustained resistance.

The day’s closest finish came at Fenner where Stamford Bridge got home with their final pair at the crease. Dom Rhodes (4-21) and Sam Tennant (3-51) looked to have put the visitors in control as the hosts were bowled out for 159, Jacob Duffill top scoring with 47. Half-centuries from Rhodes (54) and Stuart Boyle (50) should have taken the game away from the home side but Steve Sergeant’s (5-45) efforts ensured a tense climax to the contest.

Dunnington condemned York II to a sixth straight defeat, Collis King (78no) and Harwood Williams (38no) sharing an unbroken six the wicket stand after the home side found themselves in early trouble chasing 168 for victory. Earlier despite 47 from Mike Mortimer and 40 from Simon Lambert the visitors were unable to break the shackles as Dave Brent took 6-57.

The only side without a victory this season, Studley Royal, finally broke their duck at the fifteenth attempt beating Hull Zingari by 20 runs. Charlie Scatchard was the hero for the home side with 75 in a score of 173-9 as Callum Hellwig finished with figures of 5-59, the all rounder then top scored with 41 but it was to no avail as Dan Craven (4-41) and Matthew Coad (3-22) bowled the hosts to victory bringing to an end a run of four straight defeats.