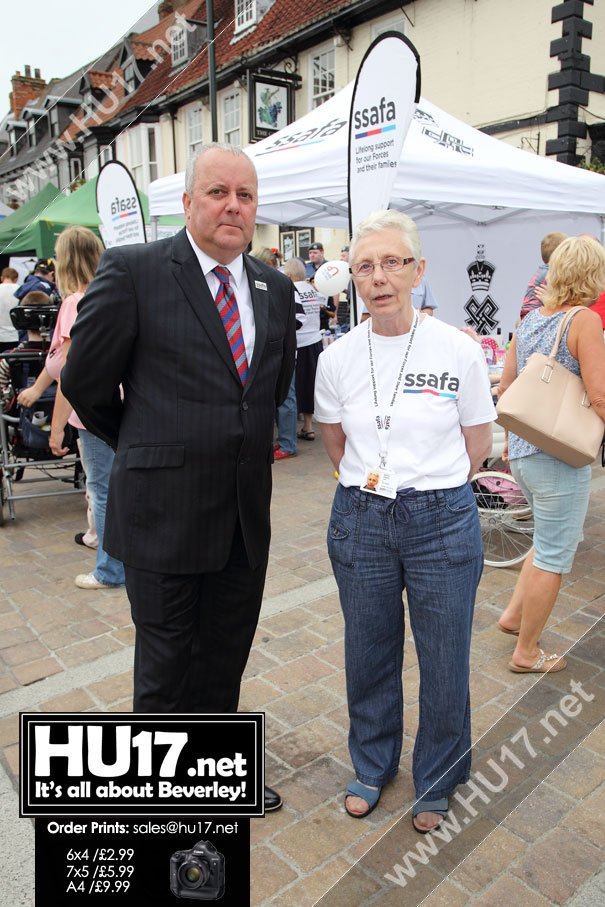 Beverley Armed Forces Day was held this weekend in the town centre and hundreds of people turned out to show their support for members of the Armed Services.

Representatives from Beverley Town Council, East Riding of Yorkshire Council and local MP Graham Stuart were among the crowds who all applauded as troops paraded into Saturday Market.

“Saturday saw many months of planning condensed into a six-hour event. I cannot thank enough those took part supported today.”

“Whilst the weather could have been kinder I applaud the spirit of those who stayed came back to see the day through.”

“Well done to all from the Defence School Transport that led the parade and to the musicians and vehicle owners took part and displayed their collections.”

Highlights of the event include the fly past by Hurricane from the Battle of Britain Memorial flight countless vehicles, which suddenly caught the imagination of the youngsters.

One of many people who attended the event told HU17.net;

“I’m a keen supporter of the armed services and always have been. Beverley Armed Forces Day gave me a chance to show my appreciation to the men and women who risk their lives for us.”

“Today was particularly important for me given recent events in Tunisia and presented me with an opportunity put my hand in my pocket and support the many charities that help our veterans and their families.”

While there were sporadic downpours, quite a lot of the people at the event showed true British spirit and on a day that celebrates our Armed Forces dug in continued to enjoy entertainment.

Given the issues surrounding funding for the event, keen supporters of Beverley Armed Forces Day Northwood set up a marquee to help.

Throughout the day, they sold refreshments raising cash, which will hopefully help ease the financial burdens and ensure that Beverley has Armed Forces Day in 2016.