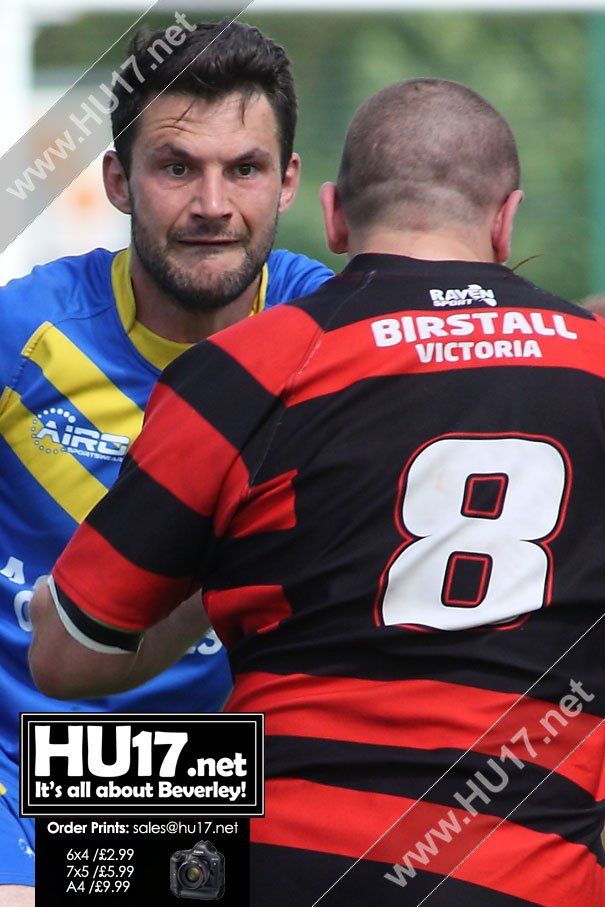 There was much to admire about this latest victory by the blue and golds. Clinically executed tries were combined with a near impregnable defence. It was a shame the match was cut short by ten minutes and a large appreciative crowd soaking up the scorching sun were denied their full eighty minute fix.

A series of sin-binnings – two from either side and a sending-off of two players – one from either side led to the match official abandoning proceedings after seventy minutes. There had been little animosity between the two sides up until early in the second half when a series of bizarre decisions had incensed both sides leading to them showing dissent. This culminated in a fracas which saw the referee simply leave the field. With more than sixty minutes of the match having elapsed the result will stand. The club will await the report to the RFL.

Beverley got off to the best of starts scoring after five minutes. Lewis Poskitt, who was influential is most of Beverley’s attacking plays, passed to Alex Starling who ran a clever angle to crash over under the posts for Anfield to convert. They continued to control the game and build pressure resulting in a further converted try Jack Humphries from close range after 15 minutes.

They were nearly over the line in the next set but a forward pass was ruled but this only served to stem the flow. Ten minutes later Alex Starling broke free down the left flank with options to the left and right of him. He elected to pass to the right and found Mike Cooper who sprinted away to touch down under the posts. Anfield converted.

Victoria were a spirited outfit and made Beverley work hard for their points. They managed to keep the home side out until just before half-time. A show and go by Lewis Poskitt saw him head towards the line with just the full back to beat. He drew his man perfectly and sent the supporting Jack Humphries over for his second try. Anfield again added the extras for a 24-0 interval lead.

There was no shortage of effort by the visitors and they had a number of attacking plays close to the Beverley line early in the second half but hosts always seemed to have all the answers in defence. It then took 15 minutes into the second half before the scoreboard was troubled again.

Jack Howdle and Lewis Poskitt combined to send man of the match Chris Johnson over beneath the posts. Anfield again converting. In the 62nd minute Mike Cooper spotted gaps on the blind side and scooted away from acting half back to score in the corner. The extras were not added on this occasion. After then the official then seemed to lose control of a game that had been played in a reasonable spirit up to then culminating in it been cut short.

This victory still sees Beverley in ninth place in Yorkshire Division One as the other results did not go in their way. Whilst Mirfield Stags and York Acorn ‘A’ lie first and second, a blanket can be thrown over teams from 3rd to 9th. If Beverley were to win their two games in hand they would climb to 3rd place. This Saturday will see a big game down at the Leisure Centre kicking off at 2.30pm.

High flying York Acorn ‘A’ who were only knocked off the top of the table with a narrow defeat to Mirfield last weekend, will make the short trip down the A1079. The game will be pivotal in Beverley’s season and maybe a test of just how far Pat Howdle’s men have come in this their first season in the Yorkshire League.