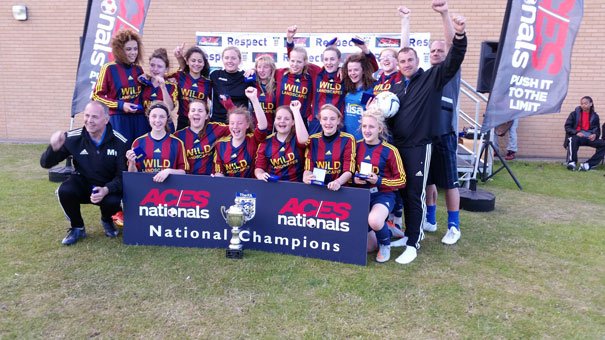 Mill Lane United Yellows girls football team created history in their final tournament together when they retained their National title for a third successive year.

This was more remarkable than their two previous national successes, due to end of the year exams the team had very limited training and their last full competitive game been the County Cup Final at the end of April. The Aces tournament is classed as the hardest test of the season as all teams are Champions of their own divisions so it’s the best teams representing their area of the country.

Mill Lane Yellows were drawn in group A with games against, Boldon Girls (representing Sunderland) York RI, Bishop Stortford, Yeovil and Sheffield Wednesday winning 3 drawing 1 and 1 defeat to finish top of the group with 10 points. The last 8 draw resulted in The Yellows been drawn against Oxford City, and one thing Mill Lane Yellows have learned over the years is that this is where the competition gets serious.

Oxford started strongly and to be fair the Yellows who had not been at their best so far during the day were second best. It was therefore, no surprise to see Oxford take a deserved lead. Clearly rattled nothing really going right for them Mill Lane were looking lost devoid of ideas heading towards half time.

One thing we know about The Yellows over the years, though they never give up, and they equalised on the stroke of half time when a brilliant cross from Marie(Misty) Russell was superbly headed into the net by Tonya Storr. The second half started with both teams creating chances, but as the final whistle went, the score remained locked at 1 1 and the game went to penalties. The Yellows held their nerve to make it through to the semi finals against Coventry City.

The semi final started and Mill Lane Yellows finally started to believe having the better of the exchanges, the midfield of Mcleod, Smith, Johnson and Storr started to dominate and ably assisted by forwards Nagee and Russell were unlucky not to get the goal. They needed to take them to the final. The second half was much the same, but despite the efforts of both teams, the game went to penalties. Again, the Yellows held their nerve to make it through to their 3rd successive Aces National Final.

Derby County were their opponents a rematch from last year. After nearly 150 minutes of football that started at 10am, the final took place at 6pm, the heavy rain from the morning had disappeared and was replaced by very hot conditions. So the scene was set Unbeaten Derby County against Double winning Mill Lane Yellows.

The game was end to end with Derby shading both possession and territory. Playing some nice passing football Derby looked the more likely to score as the Yellows tired in the heat, but outstanding defence from Courtney Lees, Courtney McConville, Charlotte and Emily Holliday kept them at bay, ably assisted by shot stopper Leah Shalgosky, who was outstanding throughout the tournament.

Goal-line blocks and some assured goal keeping kept the score level at full-time and as at last year’s tournament penalties would decide. Over the years, The Mill Lane Yellows have developed mental strength above their years and as penalties were missed and saved it came down to defender Courtney McConville to make sure the Yellows retained their trophy.

The pressure was on silence all around as McConville took that dreaded walk to the penalty spot. Placing the ball down McConville drilled the ball home to give this amazing grass roots team their third successive Aces National Title. The team embraced, and tears flowed as the enormity of their success was realised.

A tremendous effort from the full squad. So the Yellows from Mill Lane are no more seven years of unparalleled success been the most successful team ever in the East Riding Girls League, 162 games played in the local league and cups Won 153 Drew 4 with 5 defeats, their list of honours is endless three successive Aces National Titles, 7 successive league titles, 5 league Cups, 5 futsal Cups , 3 Tesco cups, 2 plate cups, 3 successive Blackpool Tournaments as well as 11 other tournament victories around the country.

An amazing 39 trophies won as well as finishing runners-up in six other tournaments out of 48 competitions entered. The team now move on to ladies football where I am sure success will follow and special mention to Amy Radford(who missed the end of the season due to injury) one of the original members of the team along with Emma Smith and Charlotte Holliday which played in the teams first game which resulted in a 19 nil victory.

Who could have thought how successful this team would come but with hard work determination and no little skill, this great bunch of girls did themselves proud .