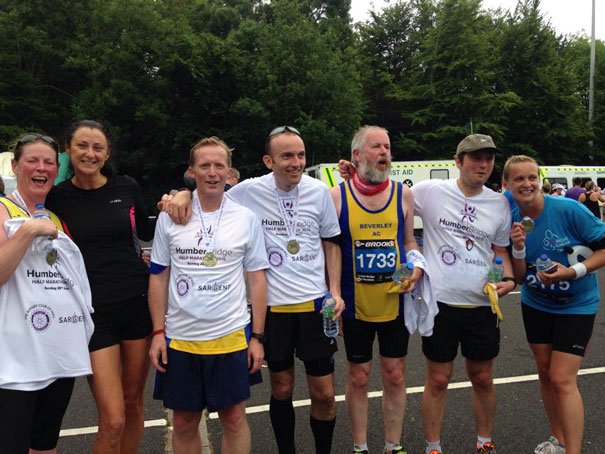 Timmy Davies produced a personal best at last Sunday’s Humber Bridge Half Marathon, which was almost good enough to give him 1st place as he came a close 2nd to the winner, Matthew Nutt of Wimbledon Windmilers, by a mere 43 seconds, coming home in 1:16:19.

Timmy, who runs for both Leeds City and Beverley AC said;

“There were a number of us who could have won it”, commenting on the strong competition that took place in the earlier parts of the race, before the contest paired down to the first two. He put his new PB down to the strong and consistent training he has been doing of late.

He was not alone in a day of PB’s for Beverley AC in a race not known for being generous on that front. Nick Riggs, a serious triathlete, turned in 1:24:51 which saw him 22nd overall and 2nd in the 45-49 category.

Jim Harbidge turned his recent fell running experience into a new best half of 1:37:11. He claims the wonders of Beetroot juice as a contributing factor! Linda Wright has improved steadily over the past year since she joined the club and mirrored an excellent Marathon time this year with a PB of 1:51:33.

It is only 11 weeks since Fiona Oakes ripped her quads and calf open in a horrific cycling injury that prevented her running the Manchester Marathon, so her time of 1:56:08 was a tribute to her grit and bravery in recovering in such a short space of time.

Steve Ogden, who is undertaking the Nutter’s June Challenge of running at least 5k every day in the month, was yet another PB for the club in 1:57:38 as was 1st Beverley woman back was continual improver, Rebecca Burge, in 1:43:29. She was 23rd woman overall and 10th in the F15-34’s.

Rachel Sullivan added to the list, running for the Downright Special Charity, did 1:56:03 in only her 2nd half marathon.

The Humber half is a challenging race with many undulations and the infamous ‘cardiac hill’ between miles 9 and 11. It has often been a hot day in recent years but this year the weather had mercy, keeping cool and overcast with a backwind to help the runners over the bridge on their return from the south bank. In addition the race had a record entry which will raise more money for the local charities it supports.