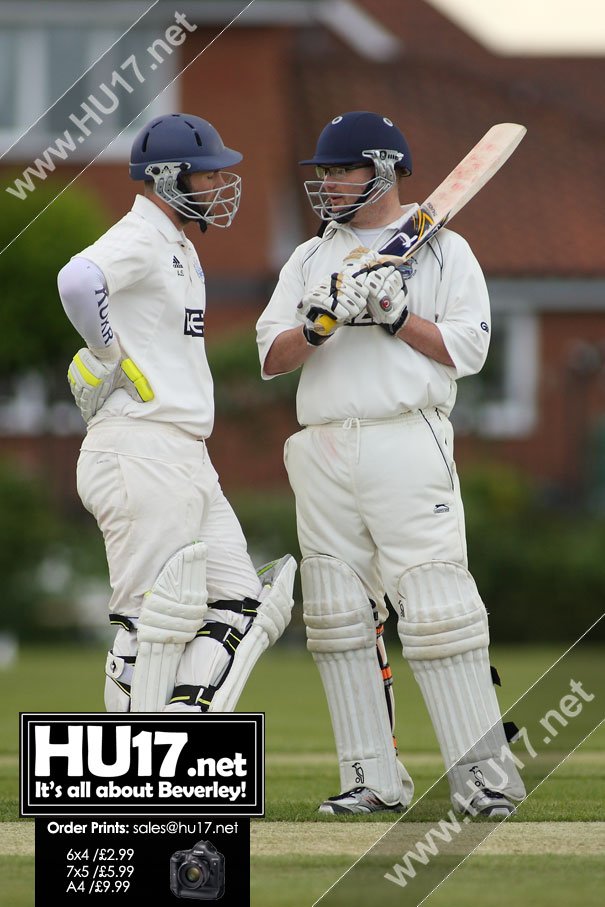 Stamford Bridge batted first against the League leaders and made 215-9, Sam Tennant top scoring with 44 and Dom Rhodes contributed 38 whilst the division’s joint leading wicket-taker Dave Suddaby took 3-67 for the home side. Woodhouse Grange looked to be in danger of losing for the first time this season as they slipped to 50-3 in reply but a partnership of 93 between Nick Hadfield (64) and Mike Burdett (50) steadied things and despite Kevin Murphy’s three wickets the hosts finished on 176-6.

Scarborough appeared in trouble when York II’s Chris Hunter reduced them to 41-3 but fourth wicket pair Mark Tennant (92) and Alex Carrie (72) combined to add 137 as they went on to score 260-8. The visitors were then always on the back foot and were all out for 145, Anthony Hunter (4-45) and Ryan Gibson (3-35) bowling their side to victory.

Third placed Sheriff Hutton Bridge were denied maximum points at bottom of the table Beverley Town Cricket Club despite making 335-2 as the home sides last wicket pair hung on to deny them victory at the Norwood Recreation Ground.

An unbroken stand of 269 from just 32 overs between Robert Pinder (149*) and Adam Fisher (123*) propelled their side to an imposing total. In reply Olly Grantham (71) top scored but it was Andrew Burton’s unbeaten 58 that left Mark Fisher (4-79), Russell Robinson (3-57) and their team-mates frustrated.

Acomb have held a place in the top five since the start of the season and consolidated that position with a 131 runs win at Hull Zingari. Matthew Dale (71) scored a second successive half-century but was overshadowed by James Fletcher (80*) whilst both Joe Dale (59) and Andy Tute (57) made significant contributions to a total of 303-5. Dale then took 3-37 and Mark Bell 4-41 as the hosts were dismissed for 172, Matthew Bunn top scoring with 44.

Dunnington continued their recent impressive run with a fourth straight win. The latest coming at the expense of Heworth owed much to an excellent performance from Jake Murphy, the all-rounder took 4-36 as with the help of Josh Barrett (4-21) the visitors were bowled out for 184, Oliver Sherwood making 84, Murphy then finished unbeaten on 93 as along Jack Bolam (50) their side cantered home with more than 15 overs to spare.

Easingwold extended their unbeaten run to six matches with a comfortable victory at home to Clifton Alliance. Opener Stephen Piercy (105) scored his second century of the season and with Paul Skilbeck (87) shared a stand of 126 as the home side became the third team of the day to pass 300 finishing on 306-7.

In reply Joe Ashdown scored the 45 required to become the first batsmen to reach 500 runs in 2015, but despite four other batsmen also reaching the forties none were able to go on to make the telling contribution as Piercy added three wickets to his early effort with the bat, before Paul Redshaw closed out the innings with three wickets for just eight runs.

With just one victory between them all season it was perhaps unsurprising that Fenner’s match at Studley Royal would end without an outright winner.

Ross Davy (82) top scored for the visitors as they posted 176-7 Graham Broadley and Dan Craven finishing with three wickets each, Craven then made an unbeaten 76 but 4-31 from Steve Sergeant restricted them to 157-8 in reply and the points were shared.