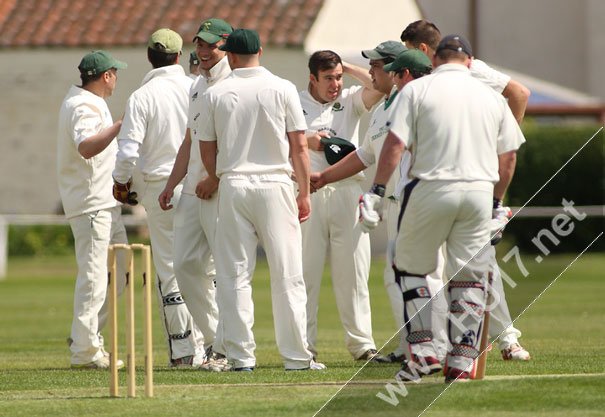 Hunters York & District Senior Cricket League Premier Division leader’s Woodhouse Grange wasted little time recording a fifth win of the season, their match against York II lasting a total of just 46 overs, Steve Burdett produced the division’s best figures to date, bowling unchanged to finish with 6-20 form 14.3 overs as the visitors were all out for 66.

Richard Brown having come in at the fall of the first wicket was the only batsman to reach double figure’s finishing unbeaten on 27. Matthew Durkin (26) and Nick Hadfield (21) both finished not out as the hosts romped home inside 17 overs for the loss of just one wicket, and with the two teams below them both losing the reigning champions now have a 24 point lead over the chasing pack.

The biggest upset of the day came at Dunnington, where the home side climbed off the bottom of the table with their first win, a seven wicket victory over previously unbeaten Sheriff Hutton Bridge. The visitors lead by David Bradshaw (72) reached 237-8, but an unbroken partnership between Jack Bolam (76) and Collis King (69) got the hosts home with seven balls to spare after Harwood Williams (55) had set them on the way.

Stamford Bridge took full advantage of those other results to climb into second place, their victory at Beverley Town Cricket Club owing much to all-rounder Mark Beckett who, along with Dom Rhodes.

Each took three wickets at the Norwood Recreation Ground home as Beverley led by Jonny Vodden (50) were restricted to 197-8. Beckett then top scored with 75 as, supported by Kevin Murphy (40) and Sam Tennant (34) , the visitors replied with 198-4.

Beverley are have now slumped to thirteenth place in the table just seven points clear of bottom spot having registered just one win all season.

Acomb were another team to have their unbeaten start to the season ended, when they lost by three wickets at Scarborough. Joe Dale (72) scored his third half-century of the season, but with only Andy Tute able to provide support the visitors were limited to 178-7. Mark Tennant (37), James Pick (33) and Darren Harland (31) all weighed in for the home side as they reached the target with a couple of overs to spare.

Heworth held on inside the top six despite finishing on the wrong end of the draw at Fenner. Will Parker (102no) and Joe Hewitt (80) shared a third wicket stand of 145 out of the home sides total of 237-3, and despite Oliver Sherwood (44), Neil Johnson (42) and Tom Owen (41) all getting starts for the visitors none were able to go on to play the innings which would have got their side closer than the 188-7 they ended on.

Hull Zingari’s first victory of the season came against Clifton Alliance, but it was a close run thing as they got home with just four balls to spare. Joe Ashdown reached three figures for the second time this season, and his unbeaten 122, along with 58 from John Gilham helped the visitors to 234-6, but despite three wickets each for David Skaith and Alex Renton the hosts got home thanks to James Berridge (60) and Jack Storey (39), before an unbeaten 29 from Callum Hellwig saw them over the line.

Studley Royal are still searching for a first win despite scoring 253-3 against Easingwold, Anthony Mackle (106) and Rob Nicholson (74) shared an opening stand of 131, and Steven Walmsley finished unbeaten on 51 but their efforts only merited a share of the points, because earlier in the day Stephen Piercy (129) and Paul Skilbeck (80) had shared a 166 runs third wicket partnership as the visitors made 266-6 in what was easily the days highest scoring contest.