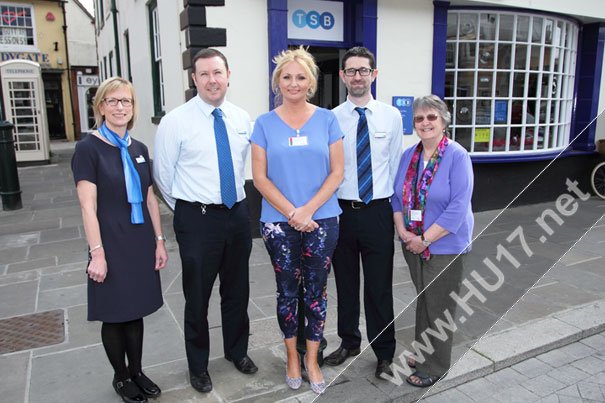 TSB in Beverley has selected the Cherry Tree Centre as the banks local charity partner for 2015.

The new incentive by TSB throughout the UK has been set up to encourage branches to recognise local causes, which share the bank’s passion for helping local communities thrive.

Over a period of time earlier in the year customers were invited to nominate local charities and social enterprises they felt warranted being TSB’s local charity partner.

In all five charities were nominated, but it was the Cherry Tree Centre that was eventually selected as the overall winner and will now be the Beverley branch official local charity partner 2015.

To mark the occasion representatives from the Cherry Tree Centre met with staff from the TSB branch in Beverley and were presented with £100 cheque.

It is hoped over the coming months a series of event’s organised by staff at the TSB branch in Beverley will raise somewhere in the region of £2000 all of which will go to the Cherry Tree Centre.

“We have planned a different fundraiser for each month that will take place inside the branch. These include naming the teddy, prize draws and we are also exploring the possibility of a cycling challenge.”

“Unlike other banks, our business and social purpose are one of the same. We are all about local banking, and we are here to help fuel local economies.”

In 2014, TSB branches throughout the country raised over £290,000 for Charity. Rather putting all their resources into one big national pledge the bank are keen to support the very communities where their customers live. There are lots of other advantages, the linkup between the Cherry Tree Centre aids people who often find themselves in a financial crisis.

The link means the charity can now work more closely with the bank to help people get back on their feet.

“It is really important for us to be part of our local community. We delighted to be working with the Cherry Tree Centre and it is great news that every pound we raise will go to support local people.”

Joanne Ramsay, the manager at the Cherry Tree Centre said:

“We are very grateful to have been selected as their charity of the year we look forward to working closely with the TSB and supporting their fundraising efforts over the coming months.”