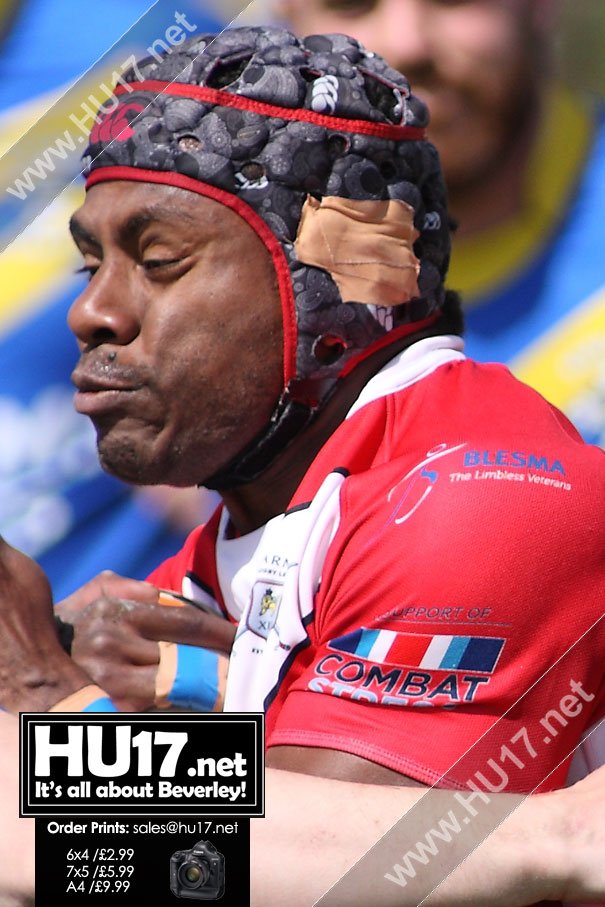 This was a pleasing event all round. Both sides were led onto the field by bagpipes, and last post was played and a minute’s silence was observed for the VE anniversary and the Keighley player Danny Jones.

The East Yorkshire branch of the force’s charity SSAFA was on hand with collections and were very pleased with afternoons work.

As for the match itself was a real treat for the big crowd which bathed in the May sunshine at the Leisure Centre. The game was played at a blistering pace form start to finish, and the result could have gone either way.

Errors perhaps proved to be the difference. Whenever the home  side coughed up possession close to their own line, the force outfit took full advantage.

In the opening quarter of the match saw  the visitors have much of possession and territorial advantage, and it was very much all hands to the pump by the hosts to stop them running away with it.

The Army took the lead in the 13th minute when their big prop forward broke up the middle and could not be stopped from going under the posts for a converted score. They increased their lead midway through the half when a towering bomb failed to be dealt with by Beverley. A cruel bounce saw them score wide out.

The conversion was missed.  After half an hour, Glen Anfield brought the home side to life when intercepting very close to his own line. He raced the remaining meters to score beneath the posts and convert himself.

He very nearly got the blue and golds in front close to half time when breaking from deep inside his own half. He could not get a pass away to his support and was bundled into touch, and a gilt-edged  chance went begging. Beverley went into to the interval 10-6 behind.

During the early moments of the second period it saw another chance for the Beverley. Joint man of the match Jack Humphries broke from his own half in spectacular fashion riding several tackles in the process. He could not find his supports, and in heavy traffic had to succumb to the tackle.

Beverley failed to take advantage of the ensuing field position. The visitors then increased their lead with another improved try seven minutes into the half.

Beverley’s reply was quick. Anfield again broke from deep inside his own half. Anfield got a pass away to the supporting Guy Adams, who conscious of the chasing cover elected to pass to Humphries, who went in under the posts to the roar of the crowd.

The visitors again penalised the home sides handling errors with another try to restore their two score lead. Beverley were not about to lie down and Pat Howdle’s policy of playing very mobile prop forwards seemed to pay dividends. Chris Johnson’s incisive break up the middle sent the supporting Mike Cooper over under the posts.

Anfield added the extras, and the comeback was still on with 15 minutes to go. However such hopes were dashed when the force’s outfit added a further try 5 minutes from time to put the result beyond doubt.

Beverley can, however, take heart from this performance against a very fit Army select side assembled from all around the country.