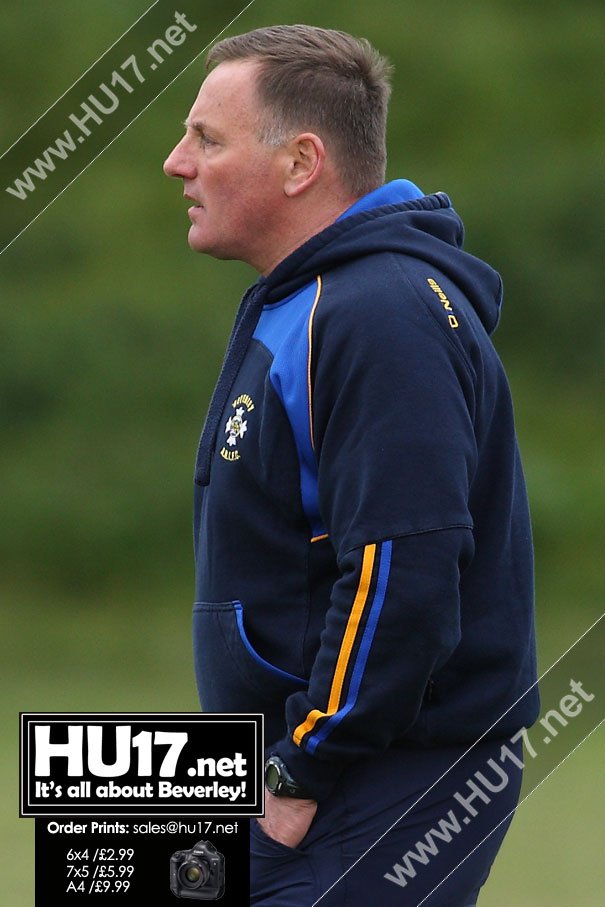 This was performance out of the top drawer for the blue and golds at the Beverley Leisure Centre.

Indeed, it was a performance which should kick-start Beverley’s season and go a long way to answering some of the sceptical voices that have been around since Beverley’s switch to the Yorkshire League.

Coach Pat Howdle heaped praise on his side. He said;

“You should be proud of yourselves today turning over a previously unbeaten side that came today with a big reputation and big ambitions.”

Following on from last week when they took the field with a depleted lineup, Beverley were able to recall most of their big guns.

Jack Humphries returned to the stand off half position, Glen Anfield to the wing, Sam Roe to centre and Ben Calvert was slotted in at second row. With Ryan Watkin packing down in the front row along side Louis Hubbard, the pack had a very mobile look to it.

The home side dominated the opening exchanges with props Watkin and Hubbard gringing out the meters laying a platform for half backs Poskitt and Humphries to give the ball plenty of air. They took the lead with a converted try in the 14th minute when Watkin’s break saw him set up the position.

A quick play the ball saw Hubbard charge over. Beverley were unlucky not to increase their lead moments later when Lewis Pokitt’s visionary kick downfield saw Anfield chase to score. The official ruled Anfield to be offside.

The visitors got on level terms in the 26th minute when they forced their way over following a series of back to back sets on the Beverley line.

But the home side’s response was almost instant. A Mirfield player fumbled the restart kick immediately putting Beverley on the attack. After a few initial drives, the ball was shipped quickly to the left to send Craig Morfitt over. Watkin converted. The hosts grew in confidence towards the end of the half not afraid to put the ball through several hands.

A smart sitch of play to the blind by Jack Howdle sent Sam Coleman over for another converted score and there was more with half time approaching. Lewis Poskitt’s kick stuck a Mirfield defender was regatherd by Howdle, who fed Glen Anfield, who cut inside from his wing to score. With Watkin adding the extras, the visitors looked a little shell-shocked to be 24-6 down at the break.

A comeback looked on the cards for the visitors early in the second half when they regathered a kick ahead on the last tackle to score wide out.

However, the visitors hopes were soon dashed. Sam Coleman made an incisive break to set up the field position. Substitute Bobby Howdle then was on hand to get a pass to another substitute Chris Johnson, who crashed over for a debut try. Watkin again tacked on the extras.

The visitors then enjoyed much more possession and territorial advantage aided by a string of penalties. Their heavy pack at times attempted to steamroller their through, but Beverley appeared to have all the answers. Credit must go to the blue and golds defence as they withstood a number of repeat sets close to their own line.

Finally as the West Riding outfit threw passes in desperation, the verdict was put beyond all doubt ten minutes from time. A pass was intercepted by Glen Anfield for him to race the remaining 60 meters to score beneath the posts, and Watkin added his sixth and final conversion of the afternoon.

Watkin also took the man of the match award just nudging it in a very good all round team performance.

A healthy crowd enjoyed a good all round spectacle and perhaps saw something of the future of amateur rugby league. Beverley has no game this Saturday, which should be a handy break with several players carrying knocks from Saturdays game. The next game will be the charity match against the Army on May 16th.